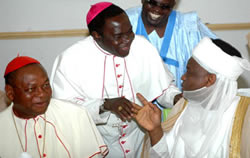 The Sultan spoke at the Northern Nigeria Governors Peace and Reconciliation Committee meeting in Kaduna, blaming northerners for inflicting heavy pains on themselves.

His words, “Let us sit and talk freely and articulate positions that will bring us out of the quagmire we put ourselves. It is important that religious and traditional rulers from our various states sit together, so that each and everyone of us will talk freely for us to articulate a position as the way out of this problem we find ourselves.

We northerners have put ourselves in a quagmire, because whatever that is happening in the North is our own doing. This was because we did not do what we are supposed to do. And since we know that, we have to solve our problems ourselves. So, I think, it is not a bad idea that the committee was set up.

“We wrote a memo of about nine pages or thereabout covering various issues affecting the country and the north in particular to the then Acting President and now President. Goodluck Jonathan, through the Nigeria Inter Religious Council, NIREC, where we suggested solutions to the problems.’’

In his own remarks, the Catholic Bishop of Abuja, Cardinal John Onaiyekan, attributed the security challenges facing the North and the country in general to high level of poverty in the country and the region in particular.

Onaiyekan further said that another aspect of the problem was associated with religion, saying that, bad image of the country has spread to the outside world and there was need for the stakeholders to address the issue with a view to putting a permanent end to the problems.

He stressed that, Christianity and Islam in Nigeria should not be seen as an accident of history, but God’s design that cannot be changed by anyone.

According to him, the main problem in the country was bad governance and once that is addressed headlong, all other problems would be tackled too.

The Catholic Bishop of Sokoto Diocese, Most Rev. Mathew Kukah, in his remarks lauded the participation of both Sultan Abubakar and Cardinal Onaiyekan saying, “With the Sultan and our amiable Cardinal as members of this committee, we should have the confidence that all sides will be well represented and every view honestly put down with suggested solutions. We also hope that the government would play its own parts when this assignment is finished.”