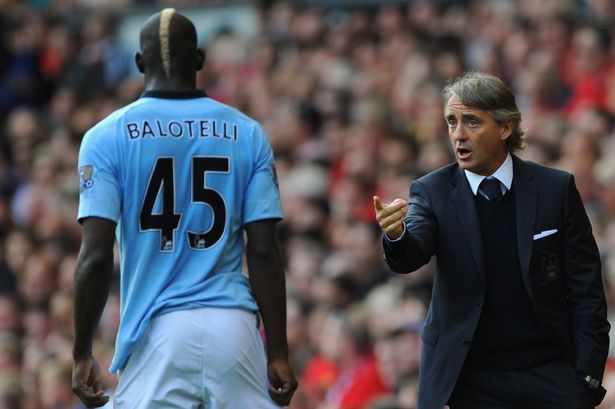 Bad boy striker doesn't think he deserves punishment for a series of breaches of discipline Mario Balotelli is taking Manchester City to a Premier League tribunal to overturn a £340,000 club fine. The controversial Italian striker will appear before an independent two-man panel in London on ­Wednesday after being docked two weeks’ wages by the champions.

Sunday Mirror Sport understands that City handed down the fine after deciding that Balotelli was guilty of a series of breaches of discipline. But the 22-year-old believes that the punishment is ­unjust. After failing with an appeal to the club’s hierarchy, he ­instructed his agent to pursue City through a tribunal.

If Balotelli loses his appeal, he faces paying the five-figure costs of the hearing, as well as the fine. The £170,000-a-week ­forward clearly sees that as a gamble worth taking.But he also risks ­alienating himself even further from the club. City’s Abu Dhabi-based owners are worried that Balotelli is giving the Blues a bad image with his ­constant indiscretions – on and off the field.

Manager Roberto Mancini is also beginning to waver in his support for a player described as “unmanageable” by Jose Mourinho while at Inter Milan.
Balotelli was left out of the City squad for ­yesterday’s trip north to Newcastle. Mancini made clear his anger, amid claims that the player’s training had not been up to standard in the past few days.

Questioned on why ­Balotelli didn’t travel to the north east, Mancini ­replied: “Mario is not in good form at the moment. “It is better for him to train well.

“His form is not good enough to play.” Privately, the City boss now wonders whether ­Balotelli will ever fulfil his potential. He has used Balotelli ­sparingly this season and substituted him after 55 minutes of last week’s ­Manchester derby defeat to United. Balotelli is now one of the highest-profile players in football. But that will not save him from being sold if City can recoup their £24million ­investment.Meanwhile, Sergio Aguero could be on his way out of the Etihad – with Barcelona star David Villa ­already being lined up as a mega-money replacement.