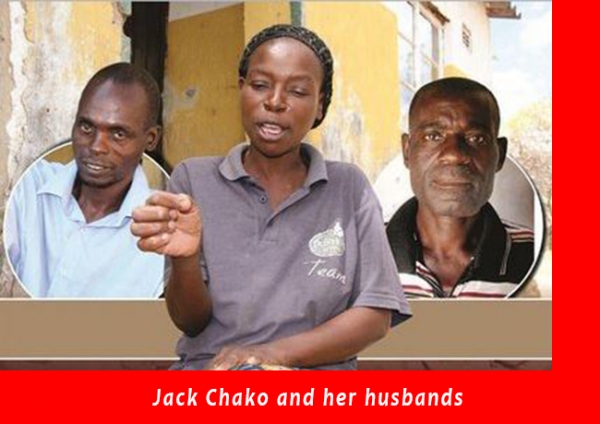 For more than a decade, Jack Chako, 38, has been living happily with her two husbands, Michael Hwita and Liford Chimoto, with whom she shares one bed.´Chako is the head of the family. On how she gets maximum sexual satisfaction from her husbands, she said:

“We are a happy family, I live with my two husbands and we love one another. My two husbands are best friends and they are always together. Chimoto is the elder husband, while Hwita is the junior. I married the second Hwita because Chimoto is elderly and increasingly becoming weak in bed and was starving me sexually. In terms of conjugal rights I favour Hwita.

He gets me there. I only do it with Chimoto as a token. At times, I feel pity for Chimoto and give him token conjugal rights and he appreciates that. The rule is no one gets out of the room, because he is not on duty. Whoever is not on duty, just watches us at it. I am in charge and my two husbands are now used to sleeping side by side in one bed."

Speaking further, the mother of five, three children from a previous marriage and two from this polyandrous affair, said, “I use some concoction to pacify my husbands. It is not a secret that I used a concoction to cow them down. I also sell this concoction to other women to cow down their errant husbands and make them compliant. None of my two husbands wishes to leave me."

The husbands, Hwita and Chimoto, on their parts, said they don’t have problems taking Chako says their joint wife. Chimoto said, “I know my failings and I appreciate the decision which was taken, we have various duties and life goes on.”

Hwita said, “I see no problem. She loves both of us and we understand our situation. “I respect Chimoto as the elder husband because I found him here.

# Topafric - A Woman Maried To Two Men Legally! — Marcus 2019-11-24 06:37
Magnificent goods from you, man. I've have in mind your stuff prior to and you're simply
extremely great. I actually like what you have got
right here, certainly like what you're saying and the way
in which you are saying it. You're making it enjoyable and
you still care for to keep it sensible. I cant wait to learn much more from you.
That is really a wonderful site.