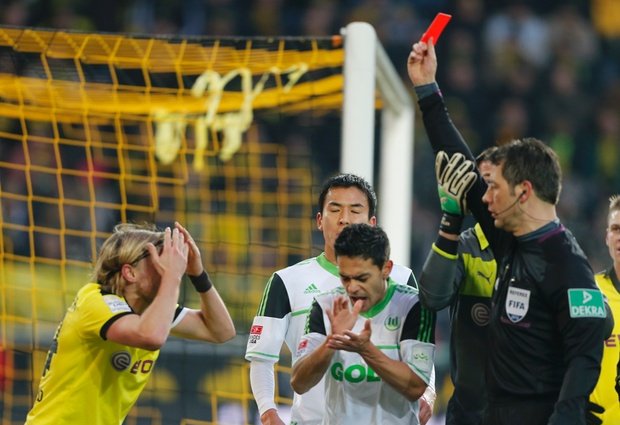 "We analyzed the scene after the match with observers. For me it was obvious on the pitch that there was a handball at the goal line and that results in a penalty and red card," referee Wolfgang Stark told LIGAtotal.

"But with the television replays, you can naturally see that there was no handball -- so it was a mistake. A clear error on my part. Of course I am sorry."

Stark ruled that Dortmund defender Marcel Schmelzer had handled a shot by Wolfsburg's Bas Dost in the 35th minute and awarded a penalty as well as red-carding Schmelzer.

Dortmund had been dominating the match until that point and were leading 1-0 until Diego converted the spot-kick in the 36th minute.

A rattled Dortmund side then gave up a second goal five minutes later.

Despite playing with 10 men, Jürgen Klopp's team levelled in the 61st minute on a penalty by Jakub Blaszczykowski.

"First of all you have to let the whole thing soak in. It eats away at you," added Stark.

The defeat meant that Dortmund remained on 27 points in the championship, while Bayern Munich pulled away in front with a 2-0 victory over Augsburg putting them 14 points ahead of Dortmund.

"The red card decided the game. We were dominating the game. My team played one of the best home matches in ages. The red card caused chaos in our game," said Klopp.
"This of course was a very hard one for us to swallow."
The German Football Association (DFB) said it would likely not suspend Schmelzer for the incident.