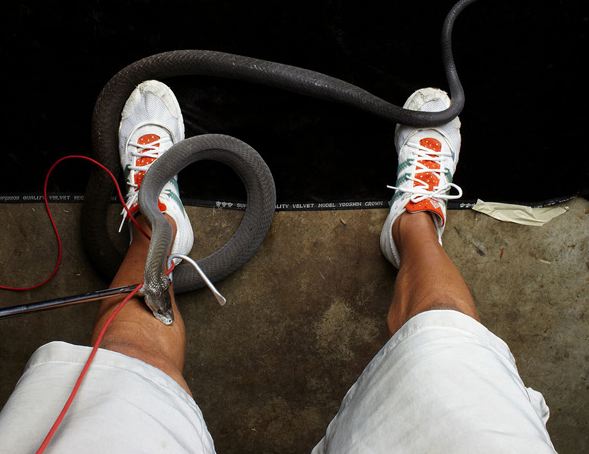 KwaZulu-Natal - A Zululand man has survived a black mamba attack, despite only being treated about an hour after being bitten.

A nurse at Hlabisa Hospital said most people died if they did not get treatment within 30 minutes of being bitten.

The nurse, who asked not to be identified because she is not allowed to speak to the media, said Makhundu Thusi was the first person in Mpembeni village to have survived such a bite.

Thusi, 30, said he was aware of at least two others who had died last year. “It is a miracle that I’m still alive.”

He said he was connecting a pipe to a spring water hole on Saturday when the mamba appeared from the bush.

“I was picking up the pipe when the snake appeared and raised its head to the level of my knee. Then it attacked me before it disappeared.”

He tied a rope around the upper part of his bitten leg to minimise the circulation of the poison in his bloodstream, he said.

When he got home his grandmother gave him potassium permanganate (a mild antiseptic) to drink. His neighbours gave him a traditional concoction.

“I think that helped to slow down the poison. But on the way to hospital I became very ill. I was sweating, vomiting and messing up my trousers. My hearing and sight also started fading,” Thusi said.

When he finally got to the hospital an hour after the bite, he was taken to theatre where he was given an injection.

Hlabisa Hospital spokesman Themba Shange confirmed that it was the first time the hospital had managed to save the life of a victim of a black mamba bite.

“We usually resuscitate the snake victims and refer them to Ngwelezane Hospital in Empangeni. But they do not make it,” he said.

Herpetologist Martin Rodrigues, a manager at Crocworld Centre in Scottburgh, said it was common for people to survive and make a full recovery after being bitten by a black mamba. He said this depended on the severity of the poison.

The chances of survival had increased because the treatment for venomous snake bites had improved in the past 20 years.

mambas could be found throughout the province, especially in coastal areas. -