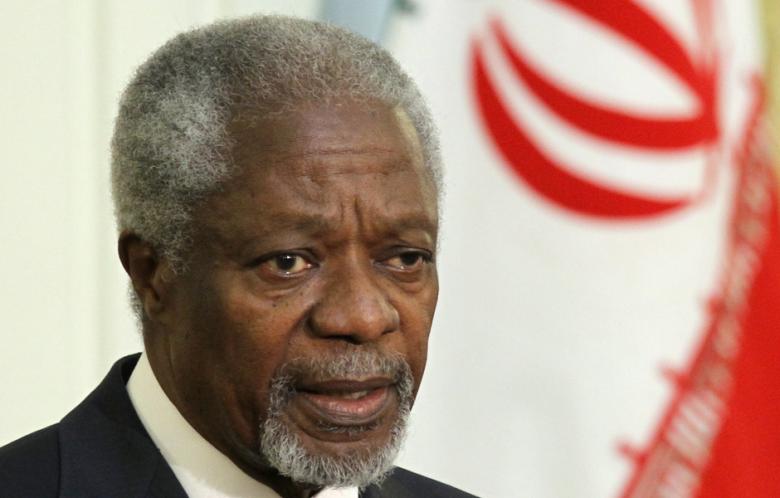 There certainly are advantages in being a Ghanaian. Of course, there are challenges as well, but for the moment, I am concentrating on the advantages.

There is an advert in a recent issue of the Spectator magazine, for "a Spectator Events Exclusive" at which "the famous S-G is appearing" and a "renowned writer and broadcaster, will lead the discussion of Mr Annan's new book Interventions, A Life in War and Peace".
I am not sure that I would describe Mr Annan as oozing with charisma as one of the speakers claimed, but I would certainly agree he is cool”

Now I just went to the launch of this book at the University of Ghana and the great man himself was there, the famous former secretary-general in the advert that is, and he told the assembled hall why he wrote the book and he went to great lengths to tell his side of the Rwanda genocide story, probably the biggest catastrophe he presided over.

He took questions from the audience and he signed copies of the book which were offered to us at a huge discount.

I did say there are advantages in being Ghanaian, remember?

Kofi Annan, the former UN secretary-general, is probably the most famous living Ghanaian and the University of Ghana, of which he is chancellor, organised the launch of the book.

The launch did not go the way book launches normally go in these parts.

Nobody auctioned the first copy for an outrageous sum of money and, indeed, somebody suggested during the question and answer session that the book should be made available for free online.

'Goose pimples'
I was not quite sure if this was to be just for us Ghanaians or for the whole world.

It was impressive that all the speakers at the launch managed to find something interesting to say about the book and its well-known author.

Mr Annan was criticised for the UN's failure to stop the Rwandan genocide
I am not sure, though, that I would describe Mr Annan as oozing with charisma as one of the speakers claimed, but I would certainly agree he is cool.

By the way, he is apparently called "Mr Cool" by his colleagues.

I had heard some of the anecdotes that have found their way into the book, but the story about the meeting with the imprisoned Nigerian opposition leader Moshood Abiola still gives me goose pimples.

I am African... I reserve the right to criticise Africa and Africans and I will keep on doing this ”

Kofi Annan
Mr Annan tells the story about being taken to see Chief Abiola in the middle of the night (the description of the journey there alone would justify whatever you pay for the book).

A few minutes into the conversation, as Mr Annan was negotiating the terms of his release, Chief Abiola suddenly asks: "But who are you?"

When he is told he is speaking with Kofi Annan, secretary-general of the UN, he asks: "What happened to the other one? The Egyptian?"

Suddenly you got an insight into the conditions under which Chief Abiola - the presumed winner of the 1993 presidential elections - was detained by Nigeria's then-military regime.

Chief Abiola did not know that Boutros Boutros Ghali was no longer the UN secretary-general.

Then there is the anecdote about the press conference in Gabon with a group of African journalists.

Why, Mr Annan was asked, did he so often criticize Africa and African governments?
Part of his answer to this question is music to my ears and makes me proud to call Mr Annan my compatriot.
I really must borrow this answer whenever I am taken to task for criticising African leaders.

The Spectator magazine called their event - which takes place on 17 January - with Mr Annan the perfect Christmas gift. The tickets cost $32 (£20) plus value added tax.

Well, I just had the perfect gift and I did not pay a penny for it.

There are advantages in being Ghanaian.