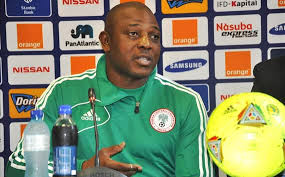 A Nigerian Millionaire Dr Mike Adenuga Jr, the Chairman of Globacom has on Monday redeemed his promise he made to reward the super Eagle Coach, Stephen Keshi with two brand new cars for leading Nigeria to victory during 2013 Africa Cup Nations earlier this year in South Africa.

Handing Over the Keys of the vehicles Range Rover sports and Toyota Camry Saloon car to Keshi in Lagos, Globcom´s Group Chief Operating Officer Mr. Mohamed Jameel Observed that Keshi, with AFCON victory in South Africa symbolised the new Philosophy of Globacom. ”The victory of Stephen Keshi tutored team underscores the ability of human beings to triumph over odds”said Jamel.

He noted that Eagles victory at the last Nations Cup was won by hard work, determination and can do spirit..He promised that Globacom would continue to support the nationa´s football team through thick and thin as it had done over the years.

Responding Keshi thanked Adenuga for his numerious support for the national team and prayed for continuous success for Globacom. He said that the kind gestures would spurs them to achieve more laurels for the country.