The Government in Hamburg is working towards encouraging African adults and youths to join the Police Force.

The Integrationbeirat of the Hamburg Senate organized an event on the 19th of April to help those interested “penetrate” this field and if possible get an Ausbildung(Training) or study to become a Police Officer.

With all the brutalities many foreigners (especially Africans) face in the hands of the police, the Hamburg government hopes having more Africans in the Force will reduce the victimization and increase diversity.

The assets of German households have more than doubled since 1992. However, only ten percent of the population shares half of it, the bottom half has only one percent - and the state will be poorer.

Hamburg has become the first German state to strike an historic agreement with Muslim community groups, but the deal has riled some members of the political establishment, who claim it undermines the separation of religion and state.

The agreement was struck between Hamburg city authorities and the council of Islamic communities (Schura), the Turkish-Islamic Union (Ditib), the association of Islamic cultural centres (VIKZ), as well as the city's Alevi community. Hamburg Mayor Olaf Scholz was set to sign it on Tuesday, the Hamburger Abendblatt newspaper reported.

Religious instruction in schools and state recognition of Muslim holidays are among the cornerstones of the deal, which ties into existing agreements with Christian churches and Jewish communities.

In future, Muslim teachers will join Protestant pedagogues at the front of the classroom, the paper said. Moreover, Muslim holidays would be given equal status with other religious holidays, such as the Day of Prayer and Repentance celebrated by Christians.

The agreement, which was launched by the city's former mayor Ole von Beust in 2007, also sees Muslim groups pledge to adhere to the core values set out in Germany's constitution - including religious tolerance and gender equality.

Yet despite broad support for the deal in Hamburg's legislative assembly, not all politicians have endorsed it.

Members of the pro-business Free Democrats have taken a critical view, with the party's deputy in the assembly, Anna von Treuenfels, telling the Hamburger Abendblatt that such agreements "fundamentally contradict the liberal world view that calls for maximum possible separation of religion and churches and the state."

She also warned that "imprecise" formulations in the agreement could open the city up to legal headaches - saying it does not expressly regulate the wearing of headscarves or other religious clothing, such as the burka, during school instruction.

Hamburg's school board dismissed those concerns, however, saying decisions on such issues would be made on a case-by-case basis.

"As soon as clothing has a de-personalising effect, the line has been crossed and wearing it would not be allowed," spokesman Peter Albrecht told Hamburger Abendblatt. "Wearing a burka during class in Hamburg is not permitted." 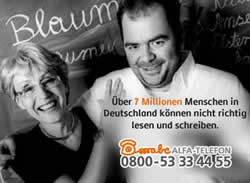 7. 5 Million people in Germany can hardly read or write. This figure is about 14% of the working population in Germany. Most of these people are considered “Functional Illiterate” This are people capable of writing a few sentence or identifying few words, but can hardly read a complete sentence.

As parents, institutions and agencies we are challenge to do more.

A Swiss vote on Sunday in favour of giving small shareholders the right to cap executives' pay has prompted German politicians to call for a similar law in this country.

More than two-thirds of Swiss voters came out on Sunday in favour of a new law that would allow shareholders to decide what salaries the top executives should get, and get rid of "golden handshakes" - bonuses for top managers departing or arriving on the board.

The result prompted several German politicians to come out in favour of a similar law not only in Germany, but in Europe.

"The referendum is an important step in the right direction," Joachim Poß, deputy parliamentary leader for the centre-left Social Democratic Party (SPD), told the Neue Osnabbrücker Zeitung. "The result should be understood as an encouragement for the introduction of a European directive."

Poß admitted that the Swiss law could not be imported wholesale as it is, but the principle was important. "People no longer accept this perverse bonus system that exists not only in banks but in industry generally," he said.

Michael Fuchs, economic policy spokesman for Chancellor Angela Merkel's Christian Democratic Union, also welcomed the Swiss initiative. "It's a way of making sure that salary decisions are made by the owners of companies, not by the state," he told the Bild newspaper.

"There is no explanation other than greed for the fact that a DAX board member earns 54 times as much as a worker," Katja Kipping, head of the socialist Left party told the WAZ newspaper group. She said that Germany needs a debate on the "limits of inequality."

Gerhard Schick, finance policy spokesman for the Green party, also called on the German government to send a signal. "We need stronger rules against salary excesses in Germany," he said.

The Mercedes-Benz is a symbol of his success: Dieter Zetsche, CEO of Daimler, earns. 8,654,000 Euros. In addition, the 59-year is a board member of RWE Power.

The CEO of Siemens, Peter Löscher, The annual income of the native Austrian is about 8,708,633.

The Briton, Terry Leahy is the seventh top earner in Europe. The CEO of Tesco, the third largest supermarket chain in the world, has an annual income of 9,922,936 Euros.

Three years ago, the chief executive of Royal Dutch Shell, Peter Voser, was the best paid European Manager. With an income of 10,208,000 Euros, he is now only in fifth place.

Bernard Arnault, leads to not only the list of the richest Europeans, but is also head of luxury goods group LVMH. The annual income of the major shareholder of Christian Dior is 10,696,670 Euros - it also secures 4th place in the list of Europe's most paid Managers.

Abad is the only Spaniard in the list of Europe's best paid managers. The graduate economist is CEO of Bank Santander and earned 10.723 million Euros.

Jimenez is CEO of Swiss biotechnology and pharmaceutical company Novartis, the world's second largest company in the industry. His annual income is € 12,544,596.

Toping the list is the German CEO of Volkswagen (VW) Martin Winterkorn, is the best paid manager in Europe! His annual income is currently at 16,596,206 Euros.

Senior citizens in Germany have seen a fifth of their buying power disappear since 2000, with the elderly in the former East Germany losing the most, new data shows.

The data, released by the German government at the request of the parliamentary faction of the socialist Left party and published in the daily Thüringer Allgemeine, shows the buying power of seniors in eastern Germany dropping 22 percent since 2000, and 17 percent for those in western Germany.

Left party co-chair Bernd Riexinger criticized the government over the figures, and said the "downward spiral in pensions" must be stopped. He added that in eastern Germany, more than anywhere, there is an "avalanche" of old age poverty on the horizon.

More seniors in Germany are continuing to work into their old age. In 2000, 280,000 pensioners had €400-a-month jobs, which are exempt from taxes and national insurance contributions.

This figure has risen to about 761,000, the daily Süddeutsche Zeitung reported last month. Of those, 120,000 were 75 and older, the newspaper said.

Critics views those statistics with alarm, arguing that the seniors are not staying in the workforce because they want to, but because they can't live off their pensions.

Von der Leyen supports supplements to raise the current basic pension of €688 per month to €850. In a letter to her party's junior members, she said: "At stake is nothing less than the legitimacy of the pension system for the younger generation."

FDP leader Philipp Rösler told the Welt am Sonntag newspaper last month that the plan would "cost millions. We do not have the money for that in the pension fund."

The government has proposed reducing pension contributions from 19.6 to 19 percent by the end of the year, but the proposal has stalled in the Bundesrat, or upper house of parliament, where members refused to take a stand on the issue, the daily Die Welt reported Saturday. 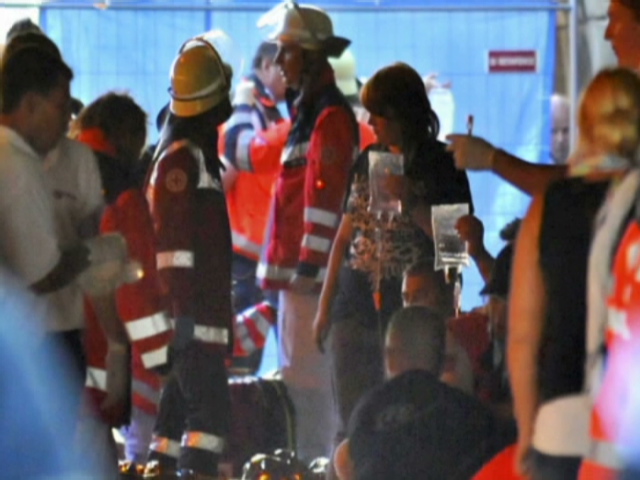 Berlin police are investigating separate shootings that left two young men seriously injured on Saturday and Sunday. Both occurred in the early hours of the morning.

At around 6:30am, a 23-year-old man was shot in the central Alexanderplatz area. He was found lying in a doorway at the train station with life threatening injuries by passersby. Police said that the bullet went through his groin.

Paramedics were called to the scene and the victim was taken to one of the capital city's hospitals, where he received emergency surgery. He was reported to be in a critical condition.

The identity of the attacker is not known - nor is the motive behind the shooting. An investigation has been launched.

The attack came around just 24 hours after another man was shot elsewhere in the city. A 22-year-old was returning from a party at 5am when the group he was with was approached by a stranger.

An argument broke out and the attacker pulled out a gun and fired a shot into the air. The seven-strong group of friends tried to carry on walking but the young Berliner was shot in the stomach as he left.

Police are appealing for witnesses, and have been asking taxi drivers working in the Schöneberg area at the time if they say anything. So far, no clues have emerged.