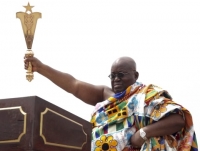 The dawn that the masses hoped for and dreamed of or could be barely wait for has finally being sealed .Few weeks ago , Ghanaians went all out in one voice,heart and peace and elected the one individual who they will hand-over the mandate of being the next President of Ghana.Hence the innaugration of the next President of Ghana in the year , 2017 on the 7th January ,2017.

The Innaugration ceremony  took place yesterday ,Saturday ,7th January 2017 at Black Star Square in the great Nation Ghana after a 30- days transition period from the outgoing government to the incoming government

The Black Star Square was beautifully decorated with tents that was built with the colours of the Ghana flag with firm security to ensure safety and order. The swearing -in ceremony was attended by over 6000 people , most in white or beautiful kente clothing, waving white handkerchiefs signifying their joy and satisfaction alongside traditional drumming ,dancing and the sound of vuvuzels.
The president Elect Nana Addo Dankwa Akuffo-Addo arrived , gracefully clothed in a beautiful colourful Kente like " the coat of many colours " at the event .Not forgetting the beautiful firts lady of Ghana ,the   vice -president his excellency Mahamudu Bawumia and his beautiful wife who obviously carried the title of the day,as the "Best dressed " at the ceremony .
But can one take a minute to imagine the thoughts that went through the mind of President elect while he recited each sentence after the chief justice Georgina Theodora Wood furing the swearing in.If could look back at how the journey began forbthe president elect right from giving free legal assistance to the poor in the society to becoming a national organizer of NPP , Campaign Manager ,member of parliament, cabinet minister ,Attorney  General and minister of Justice , foreign minister , chairman of the security of justice ,Nana Addo Dankwa Akuffo Addo ,having been beaten twice for this same title he was about to be sworn in after 8years of long wait, was indeed inspiring .
The historical swearing -in ceremony which was led by Chief Justice of Ghana, Madam Georgina Theodora Wood, President Elect of Ghana took the oath of the office of presidency repeating gorgeously after the Chief Justice.The first sentence by the then Preident elect was followed by an applaud from the faithful civillians that gathered regardless of signs of cough and katarrh while he spoke .
After the swearing ,His Excellency , President Nana Addo Dankwa Akuffo-Addo waved at the people before proceeding to hold the stuff which signifies the authority and mandate that Ghanaians have entrusted into his hands .
For the first time in 2017 ,the National Anthem was played at exactly 11:11am on the first saturday of the year dated 7th January ,2017, sounding the beginning of the dawn of the new era.Change has indeed come .
It is therefore official , that His Excellency Nana Addo Dankwa Akuffo-Addo is from henceforth the head of state and government  of the Republic of Ghana as well as commander in Chief of Ghana Armed Forces .
Unlike any other ceremony the presence of dignitaries including Parlimentarians ,cabinet ministers,Associated Justices , officials of Government and over 16 Ghanaian heads of State and former heads of state and government in the persons of Former Vice President  Paa Kwesi Anissa Attah , Former Secretary General of the UN ,Mr Kofi Annan , Former President Jerry John Rawlings and his wife Nana Akonadu Agyemang Rawlings ,Former President John Agyekum Kuffour and  few other African heads of state namely ;
President of Côte d'Ivoire, His Excellency Alassane Quattera (Guest of Honor)
President of  Equitorial Guinea,His Excellency Teodiro Obiang Nguema
President of Algeria,His Excellency  Abdelaziz Bouteflika
President of Egypt,His Excellency Abdul Fattah el-Sisi
Sierra Leonian President ,His Excellency  Ernest Ellen Koroma
Ethiopian President, His Excellency  Mulatu Teshome
President of Chad,His Excellency Idriss Déby
Liberia's President,Her Excellency Madam Ellen Johnson Sirleaf
President of the Central African Republic,His Excellency Faustin Theodora
President of Burkina Faso,His Excellency  Mark Christine Gabore
Vice Presidrnt of the Islamic Republic of Iran,His Excellency Mohammed Madora
There was a speech delivery by the special guest of Honor,His Excellency Alassane Quattara, President of Côte d'Ivoire and the President  of Liberia , Her Excellency Madam Ellen Johnson Sirleaf who is the chairperson of Ecowas.She delivered a good-will message on behalf ECOWAS, which congratulated Ghanaians for allowing peaceful to reign and coming together as one after the elections .She also congratulated the Mahama administration for a good job done and encouraged the the President of Ghana ,His Excellency Nana Addo Dankwa Akuffo -Addo on the responsibility that lies ahead of  him and his administartion ,hoping for a cordial relationship between Ghana and  the ECOWAS.
The most epic moment was the speech delivered by Ghana's 5th President of the 4th republic which captured a biblical quote in Galatians 6:9 and made the following mind liberating statement that should be every Ghanaian citizen's principle of life which says " LET US WORK TILL THE WORK IS DONE".
Ghana has a new President and a new direction .You and i can only wish the President of Ghana , His Excellency Nana Addo Dankwa Akuffo - Addo and his administration a productive first four-year term and contribute our quota to help him fulfil his promises of hope and change.
NANA GHANA FO MA WO AYEEKO , WA BR3 MO NANSO AFEI NA WO MMERE NO ASO NTI DE WO HENE ! !!!
LONG LIVE THE PRESIDENT OF GHANA !!!  LONG LIVE OUR MOTHERLAND GHANA  !!!
BY EFFIYA AGYEIWAAH