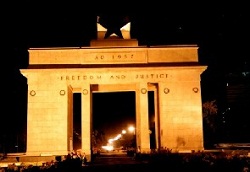 Ghana will be celebrating her 56th birthday as an independent State from British Colonial rule on Wednesday, March 6, which made the West African nation the first to break its links with colonial authority.

The event is normally marked as statutory public Day and characterised by parades by school children, security personnel, workers and other identifiable bodies at the Black Stars Square, in Accra and throughout the country.

It is also an opportunity for the Head of State to address the nation to whip up the fervour of nationalism.

Although the British Colonialists made moves towards decolonization after World War 11, the shooting of gallant ex servicemen who were marching to the Osu Castle to demand their ex-gratia after the war, escalated the agitation for independence.

The 28 February Christianborg Cross Road Shooting in 1948, led to the death of Sergeant Adjeitey, Corporal Attipoe and Private Odartey Lamptey.

After violent clashes increased for self government the members of the UGCC were arrested including Osagyefo Dr Kwame Nkrumah, the General Secretary of the party.

Due to the nationalistic aspirations whipped up by Nkrumah, he was rearrested and imprisoned.

After winning a majority in the Legislative Assembly in 1952, he was released and appointed leader of government business after a number of negotiations with the British, and on the eve of 6 March, 1957 Nkrumah declared Ghana independent at the Old Polo Grounds.

The catch phrase for the day was “Ghana Free forever”.

Ghana adopted Red, Gold and Green with a Black Star as a new Flag. It was designed by Theodosia Salome Okoh.

The red represents the blood that was shed towards independence, the gold stands for the mineral wealth, the green is symbolic of the rich agricultural resources and the black star as the symbol of African emancipation.