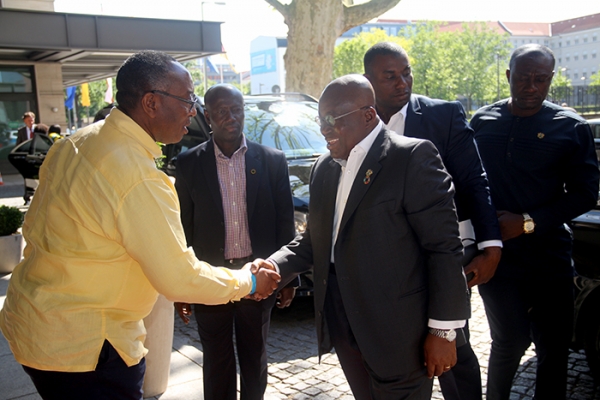 His Excellency President Nana Addo Dankwa Akufo-Addo who was on official visit to Germany at the invitation of the Chancellor Angela Merkel had a town hall meeting with the Ghanaian Community on Sunday, the 11th of June 2017 at the M'a'ritim HotelHotel in Berlin.

The meeting by all standards was very successful. The president was highly impressed by the huge attendance and thanked Ghanaians in Germany for their immense contribution in making him the President of the republic of Ghana.

“Beloved citizens of Ghana, I want to assure you that Ghana is not a poor country, we failed to set our priorities right, we haven’t managed our human capital and resources well. My government is in to address these deficits and also fight corruption in our country. I want to remain in the History Books of Ghana as the President who made outstanding and visionary promises to my people and fulfilled them.

My government has assembled the best men and women of this great country who will work tirelessly to make Ghana great gain. He went on to say his government seems to be doing something that is catching the attention of the rest of the world and Germany particularly. Ghana has been selected among three African countries and whose leaders are attending G20 Summit, and we have secured €100 million grant for the nation”.

The president who spoke later in the evening took time to answer the questions posed to his delegation by Mr. William Nketia, President, Union of Ghanaian Associations in Germany (UGAG)

The first of the questions was on (ROPAL) the right of Ghanaians abroad to vote. The President Nana Addo Dankwa Akufo-Addo assured Ghanaians living abroad of readiness to work with them to safeguard the full implementation of the Representation of the People’s Amendment Law (ROPAL). He however made it clear that, only the Electoral Commission has the right to implement the Ropal bill, hence the Diasporas should adopt an advocacy approach, “Make more Noise”

On the question of Dual Citizenship, the president promised Ghanaians that the time is due, and that his government will champion the cause. The crowd was constantly applauding the president.

The third major question was the high cost of Passport and Visa; the question was handled by the Hon. Shirley Ayorkor Botchwey (MP), Minister for Foreign Affairs and Regional Integration, who could be mistaken for a beauty queen. She told the impatient gathering that the prices will be reviewed by parliament and that Ghanaians should not hold the Ghana mission responsible.

Ghanaians have problem understanding why prices in Germany as compared to other European countries were extremely high.

The plain truth is that Ghanaians holding German Passports are technically not Ghanaians. No government easily wants to loose hard earned foreign currency. Ghanaian-/Germans wants to eat their cakes and have it...

Mrs. Gina Blay, Ghana’s Ambassador to Germany, who is yet to present her letters of credence to the German government, was introduced to the gathering. She appeared very calm and the president praised her as a good listener. The community welcomed her and promised to give her the necessary support that will make her succeed.

Ken Ofori Atta, the Minister of Finance gave a brief account of the economy, “We were able to raise $2.2 billion on the local market, this has brought some stability into the economy and helped stabilized the cedi, he said softly.

Mr. Francis D. Kotia. Ag. Head of Mission, Embassy of Ghana, Germany gave an inspiring speech, he presented Ghanaian in Germany as peace loving, law abiding and hardworking and commended the president for his quest to move fast with his desire to make a change. Mr. President, your vision of inviting the past president went viral and made Ghanaians in Germany proud.

The GHASPORA project was also presented to the delegation, the core objective was aid the government in adding value to agricultural products and to partner government to invest in the recycle sector of the economy.

The Social Entrepreneur, Mr. Desmond John Beddy was applauded for his outstanding social interventions in promoting awareness among students of African origin on the importance and significance of education for their social and professional integration in Germany. He has over a decade held the Ghanaian Flag very high in Germany.

Also at the meeting was Director of Protocol Amb. Hassan Ahmed, Executive Secretary to the President, Nana Asante-Bediatuo, the Chief Executive Officer (CEO) of the Ghana Investment Promotion Centre (GIPC), Yoofi Grant. The president was grateful to the Ghanaian community who came from all parts of Germany to meet and interact with him.

Mr. Samuel Adotey Anum, Minister/Head of Consular and Mr. Michael Nyaaba Assibi, First Secretary /Political and Diaspora and the junior staffs of the Ghana Embassy in Berlin really put up a good event. The well-organized show was a clear indication of good a working relationship between the embassy and the community leadership.