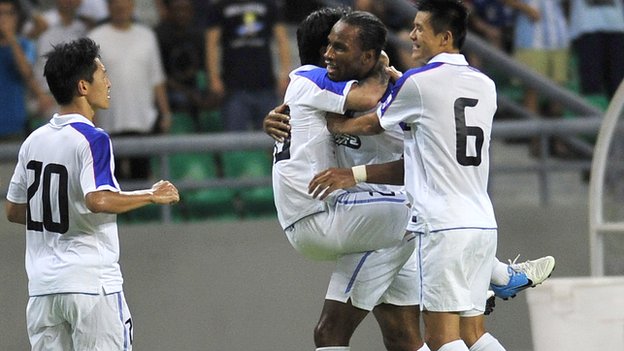 Shanghai – Didier Drogba made an instant impact on his debut for Chinese Super League side Shanghai Shenhua on Sunday, setting up his new team's equaliser in a 1-1 draw away to Guangzhou R&F.

The former Chelsea striker started the game on the bench but came on at half time, almost scoring with his first touch of the ball Ä an outrageous 40-yard free kick which Guangzhou goalkeeper Cheng Yuelei tipped wide.  Earlier Shenhua had struggled in the first half after falling behind to an unfortunate own goal by Brazilian defender Moises on 21 minutes, but the introduction of Drogba instantly transformed the visitors' fortunes.

The game had been one of China's most eagerly-awaited this season, with Drogba-fever having swept the Chinese football world. Former Japan national team coach Phillippe Troussier, now managing Chinese second division side Shenzhen Ruby, and Italian World-Cup winning coach Marcello Lippi, manager of Guangzhou Evergrande, were in the stands. Shenhua have struggled badly this season, winning just four of 17 games, but they played with a increased level of confidence when Drogba, a European Champions League winner with Chelsea in May, stepped onto the pitch.

In the 52nd minute of the game the Ivory Coast striker headed just over the bar from a cross from winger Feng Renliang, and was at the centre of every Shenhua move as the side tried to get back into the game. Drogba's biggest contribution came in the 68th minute with an exquisite through ball which found Shanghainese playmaker Cao Yunding, who rounded the keeper to equalise for his side.

The match was also notable for being the first time Drogba and Nicolas Anelka have played on the same side. The latter sealed a 175,000 pounds ($273,000) a week move from Chelsea to Shenhua last December. Drogba was reunited with the Frenchman after sealing a deal that Chinese and British media have said is worth £200,000 a week, making him the highest-paid player in China and in the top bracket globally.

He was given a hero's welcome when he arrived in China last week to start his two-and-a-half year contract. Hundreds of fans, many clad in “Drogba 11” shirts, greeted the former Chelsea star at Shanghai's Pudong airport, some carrying flowers, others brandishing his name in English on placards and many jostling to touch him.