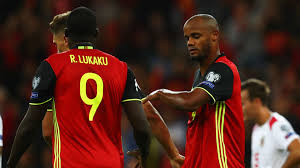 Vincent Kompany believes football must ensure diversity at administrative levels if it is to effectively address the problem of racism.

Kompany's Belgium team-mate Romelu Lukaku was the target of racist chanting during Inter's 2-1 Serie A win at Cagliari last weekend – the latest in a succession of recent incidents that have seen players abused due to the colour of their skin.

With a number of the recent flashpoints having occurred online, Twitter issued a statement on Tuesday detailing meetings with English players' union the Professional Footballers' Association (PFA), anti-discrimination group Kick It Out and clubs of players affected, while pledging to curb "unacceptable behaviour" on its site.

However, Kompany feels problems will continue to fester so long as the football bodies handing out punishments for racist behaviour do not effectively represent different ethnicities.

"Romelu is a victim of something disgraceful. Something that should never happen, not just in a football stadium but in society," the Anderlecht player-manager told Sky Sports News.

"Really, if you go back to who we are now expecting decisions from – the institutions - that is where the problem lies.

"The real racism lies in the fact that none of these institutions have representatives who can really understand what Romelu is going through.

"That's the real issue when you go through the board of UEFA, the Italian league, English league, everywhere.

"There is a true, true problem of diversity and, as long as you don't have diversity in places of power and in boardrooms, you cannot have the right decisions in terms of sanctions."

Kompany was speaking ahead of his testimonial at Manchester City next Wednesday, where Arsenal and France great Thierry Henry has become the latest player confirmed as part of the Premier League All-Stars XI.

A City side featuring David Silva and Sergio Aguero will be led by Kompany and contain a host of the long-serving captain's ex-team-mates, with all proceeds to be donated to the Tackle4MCR homelessness charity.

In the meantime, the 33-year-old has been adapting to his first managerial assignment with boyhood club Anderlecht.

It has proved a tough introduction to top-level coaching, with Kompany forced to wait until the 1-0 weekend win over rivals Standard Liege – a game he missed due to a hamstring strain – to taste victory for the first time.