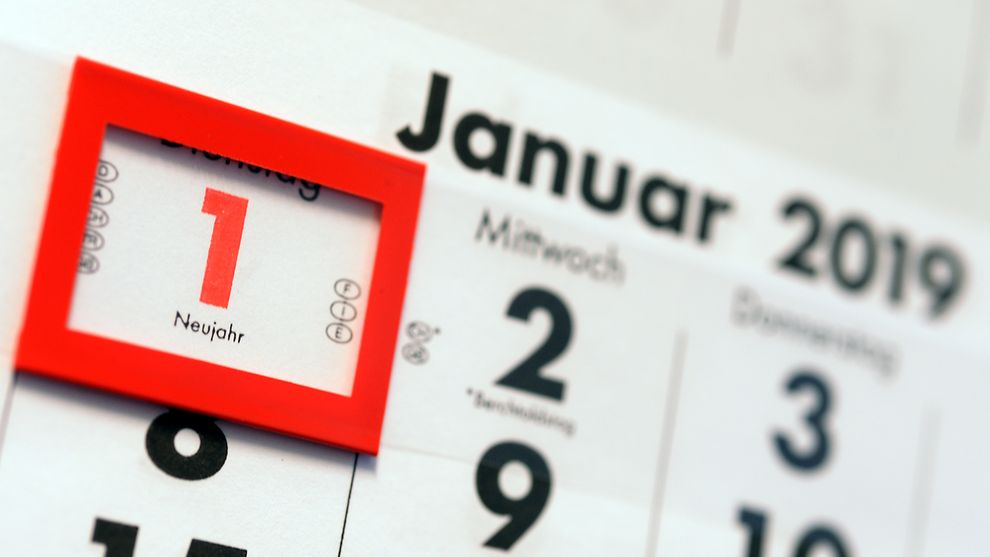 Many new laws and legislative changes, affecting employees, the unemployed, families and retirees, came into force on 1 January 2019. The African Courier takes us through some of the most important changes that we should know.

Several industry minimum wages have also risen, for example, in the roofing trade, in the electrical trade, in the building cleaning trade, and in the temporary work and care sectors.

Because a job is subject to social insurance if the earnings limit of 450 euros per month is exceeded, those who want to avoid this would have to reduce the working time accordingly.

From 2019, taxpayers will have two months longer to submit their annual tax return (Abgabe der Steuererklärung). Those who submit their tax returns themselves have time to file their returns for 2018 until 31 July 2019. For taxpayers represented by a tax advisor, the deadline will be extended from the end of the year to the 28th of February of the following year. For example, the tax return for 2018 will then be due latest 28 February 2020.

However, whoever does not submit the tax declaration on time must automatically pay a delay fine.

Income tax is now payable only on an income of more than 9,168 euros (steuerlicher Freibetrag) per year – that is, 168 euros more than in 2018. For jointly assessed couples, the threshold rises to 18,336 euros.

For full-time self-employed persons with low incomes, the minimum premium in the statutory health insurance (gesetzliche Krankenkasse) has now been reduced from around 360 euros to about 156 euros per month. The reason: Since 1 January 2019, the minimum assessment basis (Mindestbemessungsgrundlage) for membership in the statutory health insurance for the self-employed has been reduced to 1,038.33 euros (it was 2,284 euro in 2018).

Roaming charges have been history since 2017. Now phone calls and the sending of text messages to other EU countries will become cheaper this year. From mid-May 2019, the price of international calls will be capped at 19 cents per minute. SMS will cost a maximum of six cents.

CHANGES AND NEW LAWS FOR FAMILIES

Child benefit (Kindergeld) will be increased from 1 July 2019. Parents will get 204 euros/per child for the first and second child; 210 euros for the third child; and 235 euros a month for each additional child.

The tax exemption for dependent children (Kinderfreibetrag) has been increased, starting from January, to 2490 euros or for both parents to 4980 euros when assessed together.

The alimony payments for children of separated parents (Unterhalt für Trennungskinder) have also been increased. From 1 January 2019, the minimum maintenance allowance payable for children under the age of seven will be 354 instead of the previous 348 euros per month. Seven to twelve-year-olds now get 406 instead of 399 euros. Children from 13 to 18 are entitled to a monthly allowance of 476 euros, it was formerly 467 euros. The minimum allowance for children of full age remains unchanged.

CHANGES FOR THE UNEMPLOYED

The standard rates for social assistance and unemployment benefit II (Sozialhilfe und Arbeitslosengeld II) have been increased. Single parents and persons living alone will now receive 424 instead of 416 euros. If you live with another needy person in the same household, you will receive 382 euros instead of 374 euros. The standard rate for children up to five years rises to 245 euros a month, and those from six to 13 years receive 322 instead of 316 euros.

Changes in Unemployment Benefit I

Support for the long-term unemployed

For the long-term unemployed, state-funded jobs are now possible for re-entry into working life. Employers receive money from the state for five years to pay the employee: In the first two, labour costs are paid in full, and then the subsidy goes down by ten percentage points every year. Condition for qualification for the scheme is that the long-term unemployed is older than 25 years and has received Hartz IV for at least six years within seven years.

Disability pensioners will receive significantly more benefit if they retire from 2019. The pension (Erwerbsminderungsrente) will now be calculated as if the person concerned had worked until the standard retirement age – not like until now 62 years.

Anyone who retires this year has to pay more tax on their pension income. From January 2019, the taxable portion of pension (Steuerpflichtiger Teil der Rente) increases from 76 to 78 percent. Thus, only 22 percent of the first full gross annual pension remains tax-free. This percentage applies only to persons retiring as from 2019.