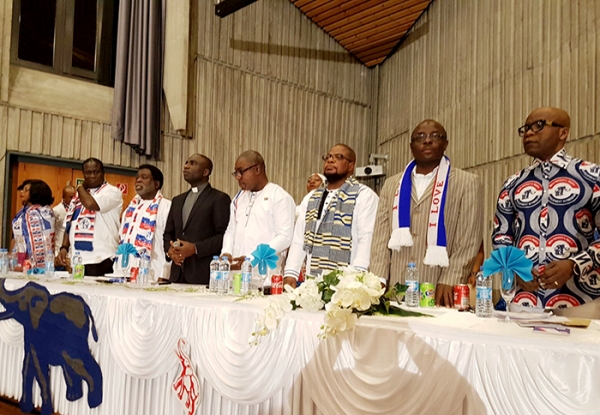 On Saturday, the 11th of March 2017 the NPP Hamburg Chapter celebrated Ghana’s 60 years of independence and the election of Nana Addo Dankwa Akufo-Addo as the president of the republic of Ghana. The event began at about 9.15pm with two beautiful ladies, smartly dressed in the NPP party colors welcoming the invited guests and taking them to their seats. The evening began with prayers by Amoako Darko and Kamal Ambassador.

Mr. Augustine Kofi Poku, the Chairman of the Hamburg Chapter in his welcome address encouraged members of his party to be good citizens, so as to encourage non-members to join the party. He gave a vivid account of Ghana’s past 60 years and emphasis of the roles of the past presidents and those who lost their lives in the struggle to attain independence for the country on 6th March 1957.

At the event were members from other Chapters in Germany and members of the national executives led by the national president, Rev. Alex Acheampong. Admittedly it was a surprise to others seeing the pastor not only in politics, but playing a leading role. He challenged the gathering not to be spectators, but to contribute their quotas in nation building. He disclosed that German NPP chapter spent over 100,000 thousand Euros in supporting the comeback of the party to power. The President, Nana Akuffo-Addo, has since assuming office heeded advice from Ghanaians in Diaspora.

In a keynote address, Nana Anane Kakyire challenged Ghanaians especially the youth to contest for leadership positions in the upcoming Ghana Union election, since himself and the general secretary are no longer contesting, he also used the occasion to praise Madam Mary Oduro, a former Women Organizer of the NPP and a former executive member of the Ghana Union for her immense contribution to the community.

The arrival of Opanin Koo Kusi a Ghanaian opinion leader and a known NDC member rekindled the entire event. He waved his flag to the audience and this single action demonstrated how tolerant and civilized the Ghanaian community in Germany has become. Belonging to different political parties only mean having diverse opinions in moving a nation forward.

The event took place at the “Bei der Christuskirche 2 in Hamburg. The organizers must be commended for a good job, there was enough to eat and drink and Dj Cliff did a great job, Onaapo was played repeatedly with JustErick and his video crew at work.
The event was moderated by Alex Tuffour and Evelyn Garbrah.