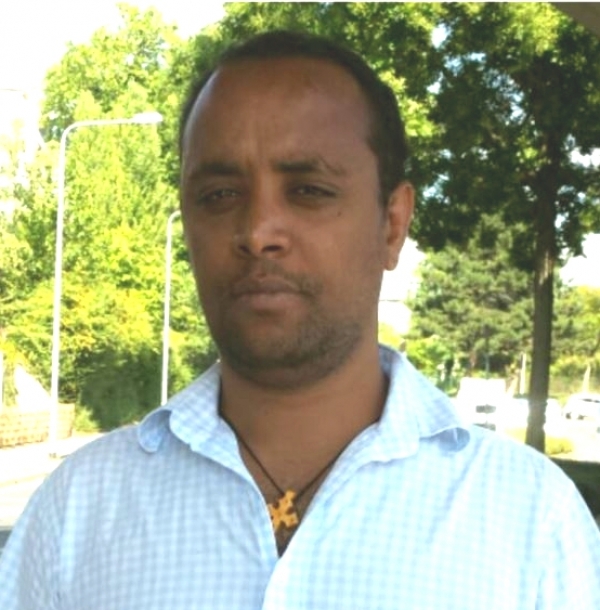 At approximately 12:00 noon on Wednesday, August 12, 2015, a 23yr old Eritrean lady named Asmayt TEKLEAB YHDEGO was found dead in her room. The findings produced by an initial investigation point towards a peronal relationship between the victim and her perpetrator.

Having issued a corresponding arrest warrant, the police are currently searching for the victims missing partner, Hagos BELAY GABREHIWOT(born on April,2, 1990 in Adi Geda, Eritrea).

BELAY GEBREHIWOT was last seen at 12:43 a.m on August 11, 2015 near the NASPA branch on Bahnhofstrasse in Wiesbaden as well as at approximately 9:30 a.m at his current place of residence.
He is listed as a suspect at this time and the Police wish to speak to him.

The Wiesbaden Police Department and Public Prosecutors office seek answers to the following questions:
1. Who knows BELAY GEBREHIWOT and is able to provide information on his whereabouts ?
2. Has anyone seen him since August 12, 2015?
3. Did anyone see him leave the bank in question and/or the direction he took thereafter?
4. Does anyone know whether BELAY GEBREHIWOT had been in contact with any particular individual(s) ? and if so with whom?
5. Did anyone perceive any suspicious events taking place near the shelter for asylum seekers on Mainzer strasse or between the shelter and the Wiesbaden train station on the evening of August 10 or in the early morning of August 11, 2015?

Anyone with info regarding this case is asked to contact the Police Headquaters of Western Hessen - 0049 (0) 611 3450
Email This email address is being protected from spambots. You need JavaScript enabled to view it. or any nearby police station in Germany.