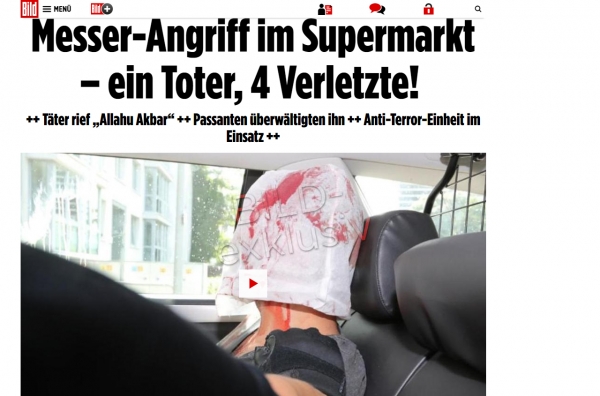 Police in Hamburg have confirmed the arrest of a man on suspicion of killing at least one person and injuring four others in a supermarket in the city on Friday, July 28th, 2017.

Die Welt reports that the man entered the shop in the Barmbek district shortly after 3pm and attacked people at random with a knife, killing one and injuring four others. He then fled the scene, but witnesses gave chase and overpowered the man, who was slightly injured. He was arrested shortly afterwards.

“After the attack he fled from the shop. Eye witnesses followed him out and were able to inform the police. Shortly afterwards officers arrested the suspect on the street in the vicinity of the shop,” a police spokesperson told Die Welt.

Police report that one of the four injured people was hurt seriously.

German daily Bild published a picture of the attacker in the back of a police car with a white, blood-soaked bag over his head, and reported that he cried "Allahu Akbar" (God is Greatest) in the supermarket. The suspect has not yet been identified.

"It was definitely a sole attacker. The first reports about a possible motive of a robbery have not been confirmed," Hamburg police tweeted.

One man, captured in the video below, told German media that he saw the man holding a knife and heard him shout "Allahu Akbar"

Police have blocked off the area, in the northeast of the port city, Germany's second largest and host of the G20 summit of world leaders in early July.

Anti-terror police have also been deployed to the scene, according to Bild.

Germany has been on high alert about the threat of a jihadist attack, especially since last December's truck rampage through a Berlin Christmas market that claimed 12 lives.

The Islamic State group claimed responsibility for the carnage in which a Tunisian rejected asylum seeker and ex-convict, Anis Amri, 24, ploughed the stolen truck through a crowd.

It was Germany's deadliest attack by Islamic militants, but not the first.

In 2016, the Isis terror group also claimed a bomb attack in the southern city of Ansbach which wounded 15 people and killed the Syrian attacker, and an Afghan man's axe rampage on a train in Bavaria that wounded five, before the perpetrator was shot dead by police.

In both of these cases, the attackers had been asylum seekers. But prosecutors think they were radicalised in Germany and not deployed from abroad to commit the attacks, like the jihadists behind the November 2015 Paris attacks were.