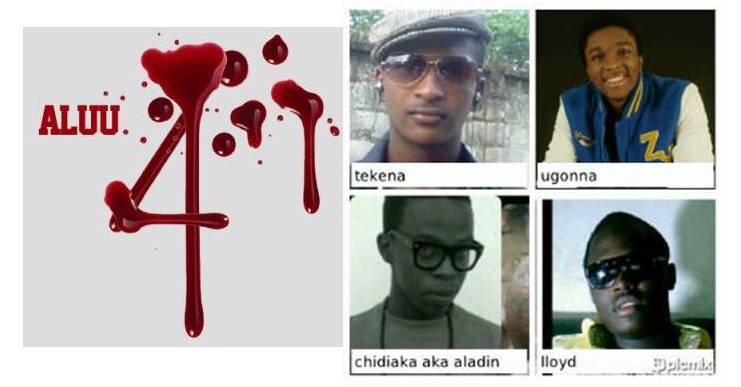 On October 5, four University of Port Harcourt students, Chiadika Biringa, Ugonna Obuzor, Lloyd Toku, and Tekena Elkanah left campus for the village of Aluu. According to Biringa's mother Chinwe, Obuzor was owed some money and he asked his three classmates to accompany him to the village to collect on the debt.
Within minutes of their arrival, a rumor spread that the students were not there to collect but to steal. An enraged mob stripped them naked while beating them with sticks and rocks then wrapped car tires around their necks -- a form of torture known as "necklacing." As the four men sat on the muddy ground dazed and pleading for their lives, someone doused them with gasoline, lit a match and set them on fire.

The killing of the "Aluu four" was filmed and posted on the web for the world to see and now serves as a stark reminder of what can happen when the rule of law fails and communities turn to vigilante groups to carry out summary executions of criminal suspects, said Eric Guttschuss, Nigeria researcher at Human Rights Watch.
"Vigilante justice and mob justice generally takes place when there is a culture of impunity for crimes and in Nigeria, the Nigerian authorities have failed to crack down on this culture of impunity," Guttschuss told CNN.
Mob justice is not unique to Nigeria and it would be unfair to characterize it as such.
One infamous lynching in particular shocked the world and helped to spark the civil rights movement in the United States. In August 1955, 14-year-old Emmett Till was beaten, his eyes gouged and shot in the head. His body was then thrown in the Tallahatchie River with a 70-pound cotton gin tied around his neck with barbed wire. His crime? Allegedly whistling at a white woman.
Till's mother insisted on a public funeral service with an open casket showing the horribly mutilated and bloated body of her child so that the world would see the brutality of the lynching. Chiadika Biringa's mother felt the same way when CNN approached her to talk about her son's killing.
"I want the world to know how our security failed us. I want the world to know that my son and his three friends are innocent of what they said they did," Biringa said.
According to news reports, the village of Aluu was on edge after several incidences of armed robbery -- and in a country where critics say corrupt police are sometimes considered more dangerous than criminals, mob justice is how many disputes ranging from pick-pocketing to kidnapping are often resolved.
But Chinewe Biringa says her son and his friends were just innocent kids. "He was a very kind hearted boy and we (were) so close," she said. "If my son sees you 100 times he will greet you 110 times."
Biringa says the boys also had promising futures in music. They had already recorded a song together called "Ain't No Love in the City" -- a title she now says seems eerily like a premonition of what came to pass.
"It's almost as if they knew they were going to die," Biringa said.

Biringa and her husband, Steven, an oil executive at Nigerian National Petroleum Corporation (NNPC), says that he watched the video because he wouldn't have believed it if he hadn't seen his son's killing with his own eyes.
"I want them to know from beginning to end the barbaric nature with which they chose hunt them down," he said. "Even your worse enemy should not be treated in such form in the 21st century that people are still behaving and killing human beings as if they were rats."
The Nigerian police have arrested 13 people and, shockingly, one police officer who was on the scene and may have encouraged and even participated in the killing. While that officer is awaiting trial, the Nigerian police force has denied broader charges of rampant corruption and abuse.
Spokesman Frank Mba says while Nigeria's police is not perfect, the police "are committed to improving our competency through training and retraining and to improve our service, deliver to protect law and order and to stabilize democracy in Africa's largest country."
Guttschuss says it is not enough. He told CNN: "Generally if you are the victim of a crime and you go to the police, you are asked to fund the criminal investigation. If you don't have the money to fund it and meet the incessant bribe to the police the case is often dropped. On the other hand, the criminal suspect, if he or she has the financial means, can simply pay off the police."
This is why these extrajudicial executions are still all too common across Nigeria. It is impossible to find official statistics, but a quick search of the words in YouTube pulls up dozens of clips showing what happens to someone accused of crime when a mob sets themselves up as judge and jury.
This incident however, has seemingly galvanized the public. There are petitions and websites springing up to raise awareness of the issue and to pressure government and police officials. But many also say there are already laws against assault and murder which, when it comes down to it, is what mob justice is all about. For things to change, they say, the culture has to change.
Chinwe Biringa believes her son is now a martyr, and hopes that his lynching will lead to change -- much in the way that Emmett Till's killing did.
"If justice is done, then I will be happy," she said. "Because I know my son died a hero. He paid the price for Nigerian students in generations to come."
CNN