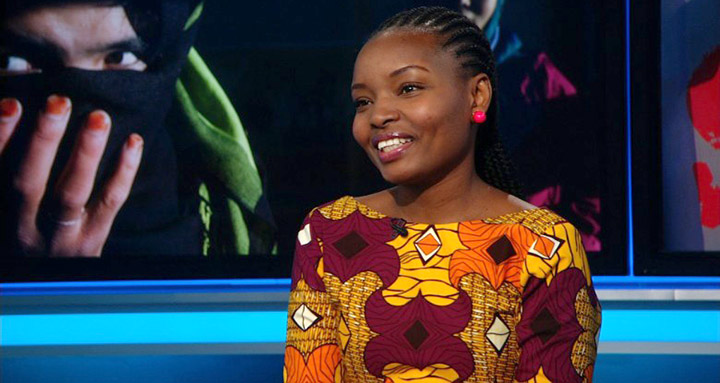 At just 31 years old, Rebeca Gyumi has a list of accomplishments anyone twice her age would be proud of. She has successfully challenged her country's legal system, winning a landmark ruling in 2016 to raise the age of child marriage for girls in Tanzania from 14 to 18; started a foundation to advocate for girls' education; won the UNICEF Global Goal Award and was named 2016 Woman of the Year by New Africa Magazine. Now, she's on her way to New York to collect the 2018 Human Rights Prize awarded by the United Nations.

"I was pretty much shocked. So shocked and caught unaware that I was even considered for such a prestigious prize," she tells CNN.

Gyumi was just a child herself when she started to see the injustice happening around her. She was 13 when some of her schoolmates were forced to drop out of school because of pregnancy and were married off. Volunteering at a youth initiative at the age of 20, she began to realize it was a national problem and not just a local one happening in her hometown of Dodoma.

"It bothered me that the age for boys to be married was 18 but for girls it was 14," she says.

It wasn't until she was in university studying law that she learned about the Law of Marriage Act of 1971 and saw the potential in trying to mount a legal challenge against it.

In 2016, with a couple of years as a lawyer under her belt, Gyumi and her colleagues decided to do just that. They started work on a legal case to petition against the Marriage Act, compiling reports to prove that child marriage for girls was an issue nationwide and why it needed to be stopped.

According to the country's national demographic and health survey of 2015/16, two out of every five girls marry before their 18th birthday with a prevalence rate of 37% nationwide, giving Tanzania one of the highest rates of child marriage in the world.

"Lots of people were not amused and thought we were disruptive, saying 'young people have tried before and failed.' But when we started attending sessions in court with a positive outcome, organizations came back and said they were willing to work together with us."

Gyumi and her colleagues persevered and in 2016, at the age of 29, she was victorious. Tanzania's High Court ruled that sections 13 and 17 of the Marriage Act were unconstitutionaland that the age for girls to legally marry should be raised to 18.

"I was so happy that day for the fact that a girl child had won. I was overwhelmed with joy," she says.

"I felt duty bound to fight for the girls I had interacted with. They didn't have enough information to know how to challenge what was happening to them."

The woman who fought to stop child marriages, and won

While her success was celebrated by many around the country, some hard-liners and traditionalists were not happy, attacking her for promoting a "Western culture."

Furthermore, the landmark ruling was subsequently thrust into legal peril when the government appealed against it last year. One of the arguments of their appeal states that child marriage can actually protect girls who get pregnant out of wedlock.

The case is currently in Tanzania's high court with a verdict due soon. Despite the challenge, Gyumi remains steadfast.

"For me I feel like we are at the moment where our country really needs to defend girls' rights. This appeal does not send a good message of our country's intention to protect girls generally. It will look really bad on the government if they win. There is no victory in winning a case that allows girls to get married younger. It's not a victory a country can be proud of."

Even if the law is upheld, Gyumi says there's still a lot of work to be done.

"The change in the law is not the only thing we're advocating for. We need to make sure the law is implemented at a ground level. We need to teach girls around the country to stand up for their rights and continue engaging with communities."

A girl gets married every 2 seconds somewhere in the world

Gyumi's success is testament to the power of education, a cause she now advocates for through her foundation, Msichana.

"The fact that I'm here today and doing what I'm doing is due to education. My family didn't have a lot but they sacrificed what they had to give me an education. Imagine what it's like for other people in my country, if they're able to get an education and explore life without limits, without boys telling them 'you're a girl, you can only go as far as this,' those kind of voices can then be challenged."

Winning the 2018 Human Rights Prize puts Gyumi on the international stage alongside other activists such as Malala Yousafzai, Denis Mukwege and Nelson Mandela, and it's not something she takes lightly.

"It's not just a personal honor but my country's honor, putting our country on the map. It's a proud moment for me and for the girls I stood up for and for the ongoing global progress that is happening around girls' and women's rights."

Asked what her message is to other young girls out there, her answer is simple.