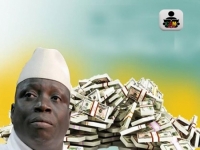 Gambia’s ex-ruler Yahya Jammeh stands accused of stealing more than 11 million dollars in cash from state coffers before flying into exile at the weekend.

Luxury goods including cars are also said to have been flown out of the country.
An adviser to new President Adama Barrow said that 500 million dalasis ($11.45 million) had been withdrawn by Jammeh in the past two weeks alone.

Speaking to radio station RFM in neighbouring Senegal, where he is waiting to return to Gambia, Barrow said:

“According to information we received, there is no money in the coffers.”
Barrow was sworn into office in Senegal, amid the political standoff that followed his victory in December’s election.
After more than two decades in power in Gambia, Jammeh had refused to accept defeat and only mediation by African leaders as well as the threat of force convinced him to end his iron rule in the impoverished country.

A West African regional military force has entered Gambia’s capital city of Banjul, paving the way for Barrow’s arrival – a prospect that has sparked celebrations in the streets and the return of many of those who had fled amid fears of unrest.

Thousands of Gambians have sought asylum abroad over the years, with their long-time ruler accused by rights groups of jailing, torturing and killing his political opponents while acquiring a vast fortune for himself.
euronews.com