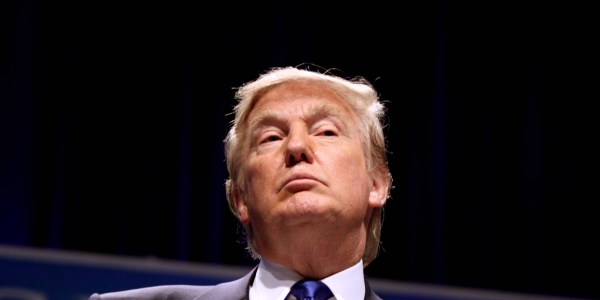 If the biggest concerns of Mr.Trump`s victory last November were how to prevent him from rolling back the gains of the previous administration, destabilizing American democracy and the world order, addressing them has so far been most effectively done by president Donald J. Trump.

Mr. Trump's shocking defeat of former Secretary of State Hillary Rodham Clinton put the future of a number of his predecessor`s legislative accomplishments and executive decisions including the Deferred Action for Childhood Arrivals (DACA) and a host of regulations that protected the environment and labor on a shaky ground. But the biggest threat was to the Affordable Care Act - also known as Obamacare - which was passed in 2010 by the Democrats and signed into law by then President Barack Obama. The law, which sets new standards for health insurance plans, creates a minimum benefit level for each plan, and most significantly prevents insurance companies from denying coverage to persons with pre-existing conditions has provided healthcare coverage to more than 10 million Americans. But by March of 2014, Republicans had attempted to repeal Obamacare more than 50 times. With a Republican-controlled House, Senate and White House following the November 2016 general election, the undoing of Mr. Obama`s signature legislative achievement looked all but done.

On the international front, the postwar world order and America's allies in Europe and elsewhere appeared destined for a bumpy ride following Mr. Trump`s victory last November. In an interview with the New York Times in July 2016, then-candidate Trump shocked the foreign policy establishment when he made U.S military support for its North Atlantic Treaty Organization (NATO) allies conditional on their ability to meet their financial obligations to the alliance.When asked by the Times` Sanger to elaborate on what would happen under a Trump presidency to NATO members who did not meet their defense spending obligations he stated:

If we cannot be properly reimbursed for the tremendous cost of our military protecting other countries, and in many cases the countries I’m talking about are extremely rich… We’re talking about countries that are doing very well. Then yes, I would be absolutely prepared to tell those countries, “Congratulations, you will be defending yourself.”

To his credit, Mr. Trump was not the first to sound that alarm. At a news conference in Brussels in March 2014, then President Barack Obama stated:

I have had some concerns about a diminished level of defense spending among some of our partners in NATO; not all, but many. The trend lines have been going down… but the situation in Ukraine reminds us that our freedom isn’t free and we’ve got to be willing to pay for the assets, the personnel, the training that’s required to make sure that we have a credible NATO force and an effective deterrent force. And this can’t just be a U.S. exercise or a British exercise or one country’s efforts; everybody’s going to have to make sure that they are engaged and involved.

A goal set by NATO is for each member to spend at least 2% of its GDP on its own defense every year. That goal is currently being met by only 5 of the 28 members including the United States, Britain, Estonia, Greece, and Poland. But while Mr. Obama was talking about the importance of meeting the minimum 2% goal for the sake of the credibility and effectiveness of NATO, Mr. Trump made it a condition for US military defense of a NATO ally which is a clear violation of the collective defense clause or  Article 5 of the Washington Treaty.  And unlike the Republican nominee, his Democratic challenger Hillary Clinton did not hold such position, thereby making his candidacy and election the more worrisome for America's NATO allies.

Also at stake following the election of Mr. Trump on the international front was the future of free trade. As a candidate for president, Mr. Trump was opposed to the Trans-Pacific Partnership free trade agreement and it was one of the few topics on which he and Mrs. Clinton were in agreement. But unlike Mrs. Clinton who once called the agreement the gold standard of free trade agreements, Mr. Trump`s position was consistent with his long-held belief that free trade with other countries - especially China - was bad for America. If it was ever likely that one of them would change his or her mind once in office, it was not Mr. Trump. His election, therefore, signaled the end of free trade as it was known.

On other issues including climate change and the use of nuclear weapons, Mr. Trump's position frightened both America`s allies and adversaries. He once called climate change a hoax invented by the Chinese in order to ``make US manufacturing non-competitive`` and as a candidate he promised to ``cancel`` the Paris climate accord. On  nuclear weapons,  then-candidate Trump reportedly asked a foreign policy expert ``if we have them, why can't we use them?``

But the threats to Obamacare, DACA, free trade, the environment, NATO and American democracy and global leadership that was signaled by Mr. Trump's election last November have so far been most effectively mitigated by... president Trump. Obamacare remains unrepealed after a third try this year and DACA is still in place and will likely be regardless of whether or not Congress do something about it over the next 5 months. Following Trump's decision to pull out of the Paris climate accord, a coalition of 227 American cities and counties and about 1,650 businesses and investors known as America's pledge has since moved to uphold the United States commitment to the accord. The United States remains committed to NATO and its NATO allies despite president Trump`s tough talk. While TPP is dead, the much-touted trade war with China has not materialized. Mr. Trump's travel ban is currently being challenged in the courts. Last month, the president was openly rebuked by his own secretary of defense James Mattis in an impromptu speech to U.S troops stationed overseas and following Mr. Trump's comments on the white supremacists rally in Charlottesville, his Secretary of State Rex Tillerson stated in an interview with Fox News that `` the president speaks for himself`` and presumably not for the country. His ambassador to the United Nations, Nikki Haley, has repeatedly and openly contradicted her boss on a number of foreign policy issues including Russia. The open rebukes and contradictions by the president's top officials have more than likely had the effect of reassuring America`s allies that Trump`s position is not necessarily the country`s position; shocking! And remember that wall that he was going to build with pesos?

No doubt his own appointees, the courts and the public which stood up against his agenda in town hall meetings across the country have assisted in stalling the Make America Great Again agenda. But it is becoming increasingly more difficult to deny that the main reason why president Trump has so far been unable to get anything done legislatively is primarily because of... president Trump.

Since he became president, many have attempted to clinically diagnose his mental stability or lack thereof. I resist from doing that since I am but a psychiatrist. However, I think it appropriate to judge Mr. Trump based on his public records from which two things are apparent: Mr. Trump cares mostly about Mr. Trump and he is shameless.

From the allegation that Barack Obama wiretapped him and the FBI covered up for Hillary Clinton to George W. Bush knowingly lied about weapons of mass destruction and the attacks on the so-called enemy of the American people - i.e. the media - and the judiciary , Mr. Trump has placed himself above the presidency and appears prepared to settle personal scores even at the cost of delegitimizing the most vital institutions of democratic governance.

In his defense, president Trump is not the first president or presidential candidate to criticize the press, past presidents or even the judiciary. A politician who is fully content with the press is no politician at all. Mr. Obama was critical of President George W. Bush both as a presidential candidate and as president. Mrs. Clinton was also critical of the FBI`s handling of her email investigation. But Mr. Trump's attacks are demonstrably different. His repeated attacks on the security agencies, the judiciary, and the press, for example, are intended not to merely point out specific flaws in individual actions or decisions but to destroy the very credibility of those institutions.

Mr. Trump's attacks are also different in another regard; they are largely founded in untruths. For instance, the allegation that Mr. Obama wiretapped him was found by his own justice department to be untrue. The allegation that the press falsely misrepresented the size of his inauguration crowd or the character of the white supremacists in the Charlottesville rally is not corroborated by any evidence. According to the New York Times, Mr. Trump told public lies or falsehoods every day for his first 40 days in office. If his frequent attacks on  the credibility of government institutions are characteristic of an individual who either does not understand the importance of trust in public institutions to the health of a democracy or simply does not care, his untruths and the frequency and ease with with he tells them are characteristic of an individual who has no shame; why else would his press secretary on his first full day in office lie about something as trivial in the grand scheme of things as the size of his inauguration crowd, something that can be easily proven as false by anyone with a smartphone or a computer?

The president has been unable repeal Obamacare likely because he was too busyattacking the same Republicans in Congress with the votes to do so: He could not pull all of the United States out of the Paris agreement because his track record proves he has no credibility on the issue and cannot be trusted to come up with an alternative measure that is better for both the environment and for American workers; his travel ban has faced serious resistance in the courts because he cannot avoid contradicting himself on the internet and likely because of his attacks on the judiciary; he cannot abandon NATO  and America`s commitment to the bloc when his top officials do not even consider his views as representative of the views of the United States; his administration has been a theater of leakslikely because of his attacks on the security agencies and his own top officials continue to rebuke and depart from his position because they do not take him seriously.

Other presidents have also encountered serious difficulties getting things done, but not when they controlled both the House and the Senate. At this stage eight years ago, President Obama and the Democratic-controlled House and Senate were well on their way to passing the Affordable Care Act. Outside of the Supreme Court nomination of Neil Gorsuch, the Trump administration has no other major legislative accomplishment to boast of and the road ahead looks all but promising.

Furthermore, the fear that Trump`s rise would energize right-wing movements and parties across Europe has not fully materialized. In France, Marine Le Pen of the Far Right National Front party was strongly rejected by French voters earlier this year. In Germany however, the far right Alternative for Deutschland (AFD) did quite well with 12.6% of the total votes in last weekend's election, making it the third largest political party in Germany. Yet it is my belief that the right-wing movements in Europe would have been much more energized and both Le Pen and the AFD would have done far better had the Trump presidency been effective.

But so far, it has not been the Geniuses of Madison and Jefferson or the unstoppable force of the resistance movement that has mostly stalled Trumpism across Europe and the Make America Great Again agenda at home; it has mostly been Mr. Trump himself, a strange ally to his own resisters.