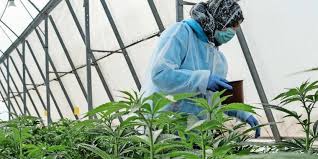 Uganda will be selling marijuana to North America and Europe later this year in deals worth $160 million. This comes after the government reached agreements to export the product for medicinal purposes.

Presently, there are orders for the psychoactive drug from at least 20,000 pharmacies in Canada and Germany, a Director at Industrial Hemp (U) Ltd in Uganda, which is in partnership with Israeli firm Together Pharma Ltd, Benjamin Cadet said.

“We signed annual supply contracts with pharmacies in Canada to a tune of $100m and €58m for Germany… the current contracts run for 10 years but along the way, we shall expand to satisfy future demand,” Cadet revealed.

This is not the first time Uganda will be exporting cannabis products. Another external market for Kampala’s raw cannabis flower is South Africa, where the National Analytical Forensic Services made an order worth $10,000 in 2017, according to the Daily Monitor.

A controversial drug with health benefits

Although it is often abused, Marijuana has great potential for healthcare and is used to relieve pain that comes with several illnesses like cancer.

Cadet explained that “People are using morphine, the main component of opium as an analgesic for cancer pain. Opium is an Opioid and more addictive and with side effects yet Cannabinol (CBD) from medical marijuana is the best option for such patients.”

Despite having scientists and technology to explore the many benefits of medical marijuana, there are no regulations in place to allow cannabis drugs manufactured for domestic consumption in Uganda. Thus, cancer patients in the country are forced to use CBD illegally.

The subject of using medical marijuana has been a quite controversial one in the East African nation, with supporting and opposing parties airing their respective views. Recently, a five-member sub-committee from the Cabinet met to discuss the dangers and benefits of the drug.

More so, there have been applications for licenses to Ugandan Ministry of Health from 14 companies, to get approval for cultivating, extracting and exporting of the cannabis plant for medical purposes.

Proponents of its use hinge their argument on the fact that its chemicals are used to treat a number of different health conditions – appetite loss, cancer, inflammatory bowel disease, eating disorders, among others. While Uganda’s First Lady Janet Museveni has openly denounced its use, referring to the drug as “satanic.”