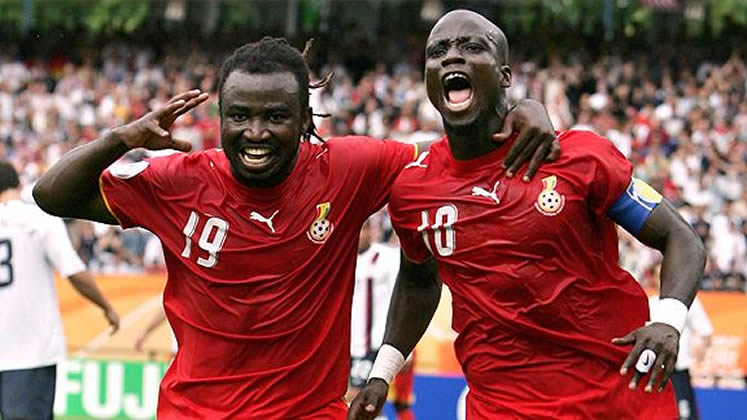 It was all about the second half. Kwesi Appiah went into the dressing room with the players and returned with no changes in personnel. But they came with a change of mind.

Ghana scored four goals in the second to come back from two goals down - a rare feat indeed - to beat Tunisia 4-2 at the Sheikh Zayed Sports City Stadium in Abu Dhabi.
Issam Jemaa had gotten two goals, before Appiah's tactical changes started the turnaround. John Boye produced a photocopy of Emmanuel Agyemang-Badu's opener against Egypt days ago when he powered a Mubarak Wakaso freekick past Aymen Mathlouthi.
Then Wakaso himself, after Christian Atsu was fouled, blasted the ball into the top corner of the net from the penalty spot. Having come off the bench, Asamoah Gyan got his name on the score sheet. And then Albert Adomah, also a sub, finished the comeback with a shot from close range.
The final warmup for the Stars started with Kwesi Appiah opting to go Solomon Asante and again, Kwadwo Asamoah at left back. John Boye started in place of Isaac Vorsah who had pulled a muscle shortly before kickoff.
The game was played in an empty stadium because organisers said there was a security precaution. It was no idea what they were afraid of.
Richmond Boakye Yiadom started as Ghana's man upfront, Atsu behind him while Kwadwo Asamoah played as a left back. Solomon Asante's trickery was nice to see, but he was brought down several times, pointing to the need for some more upper body strength for the tougher teams.
John Boye was yellow carded for a poor tackle on Saber Khlifa. The ball, at this time, had been in Ghana's half the previous five minutes, with Tunisia playing in a 4-3-3.
Tunisia were out of the blocks early, dominating early midfield exchanges and wingplay. The reward came, albeit controversially, as Issam Jemaa planted the ball into the net despite Msakni and Rabiu Mohammed being down from a clash. Tunisia lead 1-0 against Ghana.
Both Ghana's and Tunisia's players were waiting for the ref to whistle, while Darragi took the ball and lobbed to Jemaa, who run past Boye and scored.
At this point, Tunisia's control of midfield was evinced by the inactivity of Rabiu Mohammed, who was responsible for driving Ghana forward. Ghana needed thrust, but it was not there.
Kwesi Appiah seemed to have noticed the problem, and brought in Emmanuel Agyemang-Badu to replace Rabiu in a tactical switch. Derek Boateng moved slightly upfield.
Yellow cards soon came for Darragi and Wakaso from referee Abdullah Al Ajel, who had to separate a festering fight. The game's pace slackened marginally.
By halftime, Tunisia were ahead and dominating much of the half, having control of the wings and midfield. Atsu and Badu marshalled well and had been ineffective.
The second half started with Wakaso getting a great ball from Asamoah at left back which beat Tunisia. He could have laid the ball to Yiadom, but shot wide. Yiadom was livid.
Moments later, a brace for Issam Jemaa. Tunisia's highest ever scorer got his second of the night when Kwarasey badly misjudged a curled ball and it slipped from his fingers.
Kwesi Appiah's response was instant. Gyan started warming up as the pace of the game increased with both teams very positive in approach and going for it. Gyan replaced Richmond Boakeye Yiadom, and soon the revival began.
This win would mean a lot to the Ghanaian players, whose self belief would have been sorely tested following the absences of some key players and doubts from pundits about their mental strength, despite beating Egypt 3-0 days ago.

GOAL 2-2: Chris Atsu waltzed through Tunisian defence and was shoved off the ball roughly; referee pointed to the spot. Wakaso hit straight into top corner.

GOAL 0-2: Issam Jemaa scores second of the night. Kwarasey badly misjudged the ball and it slipped from his fingers. Tunisia 2-0 Ghana.

GOAL 0-1: Controversial moment as Issam Jemaa plants the ball into the net despite Msakni and Agyemang Badu down. Tunisia 1-0 Ghana.