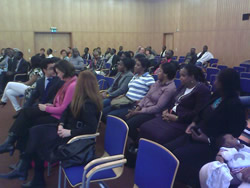 Each year 20th of June, the United Nation and countless civic groups around the world celebrate World Refugee Day. A day mapped out by the UN to honor the courage,strenghth and determination of women, men and children who are forced to flee their homes under threat of persecution, conflict and violence.

As the world celebrate today, the focus in Hamburg is what is now termed" Hamburg Refugees Crises". The brave stranded refugees from Libya,  manage to organise a press conference to highlight their plight in Germany.
The conference was held at POLITTBÜRO steindamm 45 in the city center of Hamburg, major Germany media houses, like the the NDR, Hamburg 1, RTL and TopAfric  were there to report. Some civic and human right organisations, churches and individuals who surely support the refugees right to live in Germany were present to ascertain the latest information on the way forward.
The conference started exactly at  11 am,  with Miss Latoya Manly Spain moderating, she quickly ask the gathering to observe a minute silence for those who had lost their life fighting for human rights all over the world.
She said "where is freedom and where is the solidarity required to fight for human right"
She pleaded to the media to do its utmost best in assisting the refugees to get justice in their fight to be allowed to stay in Germany.
Thereafter followed the leader and co-ordinator of the refugees Mr.Asuquo Udo, who sounded a note of warning of their resolve to match on in the face of adversity. He accused the politicians of playing politics with their life by deviating from the main issues to chasing and discouraging those he believed were helping fight for their right.
He enumerated their plight from Libya to Italy and gave lucid account of what they passed through in Italy and how they were settled and granted permits by Italian authorities who gave some of them money, others bus tickets  to proceed to other European countries.
Finally he thanked all those who had support them from the churches to few individuals organisations and human right lawyers who he had assured them of their right within the law of the european union to leave and work in Germany.
Regretly,From one refugees to few who were allowed to speak,all recounted their pathetic ordeal in Libya.The terror,emotional and psycological disaster the war, and particularly the involvement of NATO allied bombs caused them. One of the refugees who spoke last during the conference squarely blamed the European Union and US authorities for actively been instructmental in what they describe as worst humanitrian crises that befalled African in recent times.
As the the conference came to an end, Almost everybody including the journalists,reporters lawyers and human right activist all agreed the plights of the refugees are geting worst and something needs be done about it before its late.
By Adams Kennedy Chidi