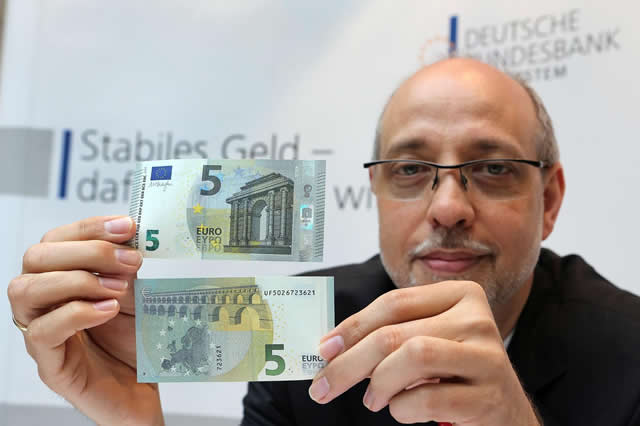 The Bundesbank started issuing a new €5 note on Thursday which will gradually replace the bill that has been in circulation since the introduction of the single currency in 2002.

The older, grey note - the euro zone's smallest both in size and value - is to be replaced gradually with the new design which has upgraded security and better protection against wear and tear.

The €5 is the first of the euro notes to have a makeover since the common currency was introduced over a decade ago.

New features include several appearances of the female Greek mythological figure Europa in the note's watermark and hologram, and a shiny iridescent "5" on the front which appears to change from dark green to navy blue when the note is bent.

Designers have also covered the new version with a protective glossy layer in a bid to improve the frequently-exchanged note's lifespan, which at the moment is usually less than a year. An average €20 note, meanwhile, lasts two years and a €50 note up to four years.

The Bundesbank said on Thursday there was not yet a time limit on using the older notes, which would retain their validity for now.

Consumers would be able to exchange old notes at national central banks in all 17 countries in the eurozone when they cease to be legal tender, said the bank.

"The point at which the bank notes from the first [euro] series cease to be legal tender will be announced well in advance," said a Bundesbank spokesman.

Unlike euro coins, which bear landmarks from their country of origin, euro bank notes are the same wherever they are printed across the eurozone.

A new €10 note is currently in the pipeline and will be introduced next year, whereas a new €20 is scheduled for 2015.