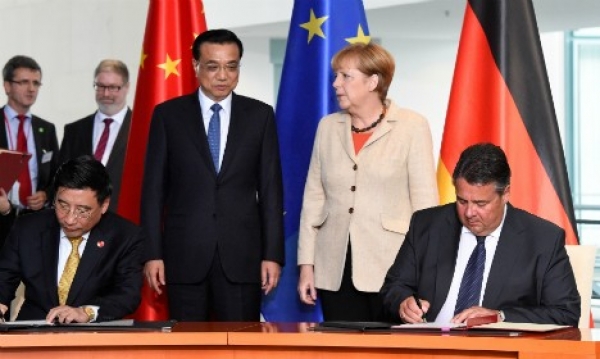 The more assertive noises coming out of Berlin are likely to dominate Economy Minister Sigmar Gabriel's trip to China in the coming days, putting to the test the oft-vaunted "special relationship" between the top export powers.
Germans have watched with unease as Chinese enterprises have swallowed up arecord number of homegrown tech companies this year, sparking fears of German knowhow and intellectual property being sold off to the highest bidder.The wave of acquisitions has also stoked grumbles over China's easy access to the country's open markets, often through state-backed companies, while foreign investors there face tight restrictions.
"Germans seem to be growing more and more sceptical about China, and consequently more willing to pursue a tougher approach to Beijing," said analyst Hans Kundnani from the German Marshall Fund. In the clearest sign yet that Berlin could be squaring up for a battle, the German economy ministry this week said it was taking a closer look at two planned Chinese takeovers -- effectively stalling both deals.
The moves have not gone unnoticed in Beijing and Gabriel will likely face some prickly questions when he leads a 60-strong business delegation on a five-day trip to China and Hong Kong from Tuesday.
'Paranoia'
Germany's first punch came last Monday when the ministry said it had withdrawn its approval for Grand Chip Investment's 670-million-euro ($730-million) purchase of chip equipment maker Aixtron, citing security concerns. German daily Handelsblatt said the surprise reversal came after US intelligence services warned that Aixtron products could be used for military purposes. The deal is now back under review, a process that could last three months.

Days later, the economy ministry said it was also reviewing the mooted sale of German firm Osram's general lighting unit to a Chinese buyer.
So far there has been little official reaction from Beijing. But a bylined commentary carried by the official Xinhua news agency was scathing, accusing Germany of "protectionist moves" that called into question "Berlin's sincerity in securing an open and transparent investment climate".
"It is time for Berlin to let go of its delusional "China threat" paranoia," it added.
Call for EU action
Chinese firms spent over 11 billion euros on German companies between January and October, a new record, according to accountancy firm EY. Included in that is the 4.6-billion-euro purchase of leading robot maker Kuka by Chinese appliance giant Midea, a deal that sparked particular alarm and which Gabriel had sought to thwart. Gabriel, also Germany's vice-chancellor, has since drawn up a list of proposals to give European Union governments greater powers to block takeovers by non-EU firms in strategic industries.

Crucially there has been no word yet on whether Chancellor Angela Merkel --who has championed close economic ties with Beijing -- approves of the idea. But Gabriel is likely to get a sympathetic hearing from at least some European peers.The new British government recently delayed the controversial Hinkley Point nuclear project over concerns about China's involvement, before eventually giving it the go-ahead.
In Brussels, an in-depth EU antitrust probe is holding up state-owned ChemChina's proposed mammoth takeover of Swiss seed maker Syngenta.
Level playing field:
Observers, however, say Germany is not about to close the door on China, one of its most important trade partners.
Rather, the latest manoeuvres should be seen as part of a growing debate about how "to get a level playing field" with China, Kundnani told AFP. Gabriel himself told reporters this week foreign investment with China could not be "a one-way street".
"We would like reciprocity," he said.

Foreign investors have long complained of the obstacles to doing business in China, such as the requirement to team up with local partners, while some sectors are completely off-limits. Friedolin Strack of the BDI federation of German industries said that despite the frustrations, German firms had benefited enormously from doing deals with China -- leaving Gabriel to tread a fine line during his visit.
"There are a lot of restrictions in Chinese markets," Strack told AFP. "Andwe should increase the political pressure and the pressure from businesses on China to remove these barriers.
"But if we say we are open only to those countries who are open with us, that would harm German companies."
THE LOCAL