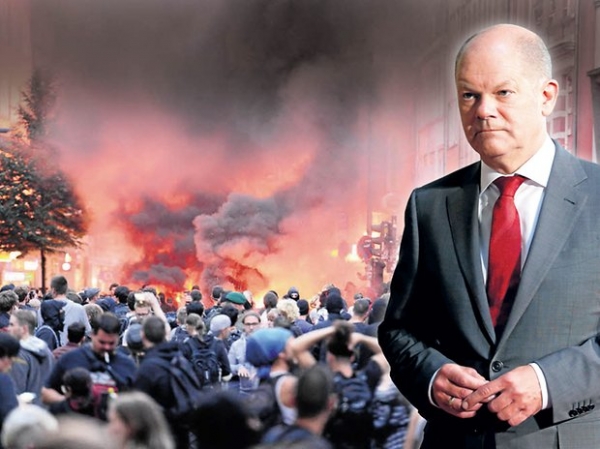 Masked gangs roamed the streets of Hamburg burning cars and looting shops on Thursday and Friday. But many people are pointing the finger of blame at the police.
Since Thursday evening violent mobs have marched down Hamburg streets, smashing shop windows, and setting cars alight.

Video footage recorded on Friday morning showing smoke-filled streets strewn with burned out vehicles and smouldering debris led to inevitable comparisons with a war zone.
By Friday evening rioters had taken to plundering drug stores and supermarkets in the left-wing Schanzenviertel neighbourhood. The owner of one drug store estimated the damage to his premises in the hundreds of thousands of euros.

This is not the first time this type of destruction from left-wing demonstrators has been seen in Germany in recent years.

When the G8 summit was held at Heiligendamm in 2007, black bloc activists turned on police and left over 400 officers injured. A NATO summit held in Baden-Württemberg and France in 2009 was also accompanied by violence, with rioters setting fire to buildings and rubbish bins, and attacking private property.

In 2015, at a demonstration against the European Central Bank in Frankfurt, police were partially overwhelmed by the scale of the violence. As many as 130 officers were injured and much of the city centre was choked by smoke as rioters set light to vehicles and rubbish bins.

In other words, history tells us that the far left are fairly partial to smashing up things that do not belong to them.

But it is not only the black bloc, a loose grouping of anarchists associated with violence and rioting in Germany since the 1980s, that has been blamed for the destruction.

As soon as the violence began, politicians, journalists and members of the public started accusing the police and Hamburg city authorities of sharing the responsibility.

The Süddeustche Zeitung, one of the leading liberal newspapers in Germany, wrote that “it seemed like the police chiefs wanted a fight.”

Meanwhile Ulla Jelpke, a leading member of Die Linke (the Left Party), who attended Thursday’s “Welcome to Hell” demonstration, claimed that police were "clearly responsible" for the violence.

On Thursday evening police told around 1,000 masked marchers at the 12,000-strong Welcome to Hell demo to show their faces. When many of them refused, police intervened to try and separate them from the rest of the crowd, thus sparking the violent reactions.

In Germany it is illegal to cover your face at a protest. Looking at the pictures of marauding masked anarchists from the past 48 hours, it is not hard to see why.

The idea that city authorities were somehow ultimately culpable also seemed to be shared by many Hamburg residents.

The Local has spoken to several locals who said the city almost brought the vandalism and violence against police upon itself, due to the summit's location at the Hamburg Messe being right next to several areas notorious for the left-wing scene.

"The mayor is responsible. He should have thought about whether it was right to have the G20 in Hamburg," one man, whose shop window had been smashed in, said.

It is fair to say that if this level of violence had been carried out by the far right or Islamists, the other two main extremist groups in Germany, the response would have been very different.

Two ugly incidents that recently took place in Germany shed an interesting light on this hypocrisy.

In October last year Germany held annual reuinification celebrations in Dresden, a city associated with the far right. When Chancellor Angela Merkel arrived at the celebrations she was jeered by right-wing protesters, who shouted “get out” at her. Merkel is hated by the far-right in Germany for her liberal refugee policy.
The incident caused a public outcry, with liberal commentators wringing their hands over the backward politics that still prevails in Dresden and other parts of eastern Germany. No one dared suggest it was the fault of authorities for holding the celebrations in a right-wing city – that would have been as good as admitting the surrender of democratic values to a mob.

At the start of that year hundreds of women reported being sexually assaulted by groups of North African men in Cologne.

That time city authorities were widely criticized for how they dealt with the violence. Later investigations showed that the police were too thinly spread to be able to stop the crimes, which emerged from a group of around 2,000 men in the vicinity of the central train station.

But no one suggested that the police were responsible for the violence. There was a clear understanding that while the police may have failed in their duty to protect, when an individual commits a crime he or she carries the sole blame for their own actions.

When it comes to left-wing violence, however, the rules change. Of course, the reasons are obvious. The rioters take on the mantle of causes many liberals believe in.

But it is the duty of objective journalism to apply standards consistently. And the left in general only make themselves look stupid when they try and relativize violence that any sane person can see first and foremost hits innocent, uninvolved people.