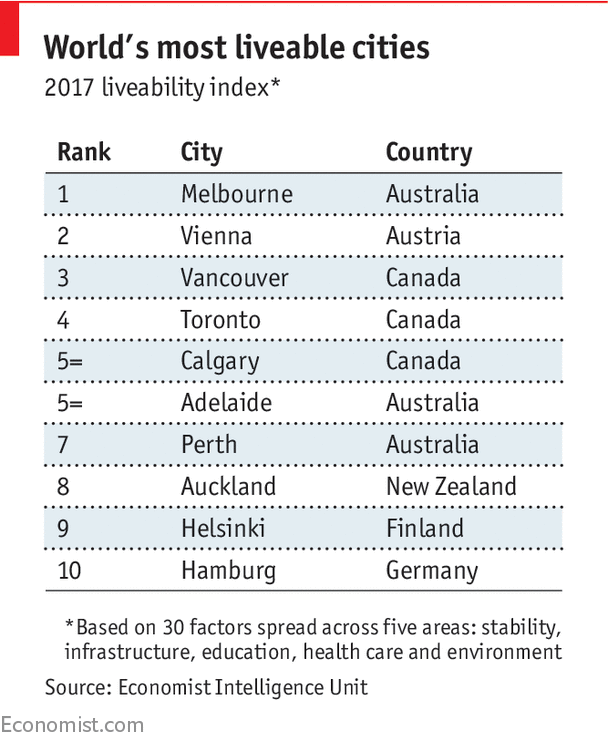 Just one German city made it to the top 10 in the Economist Intelligence Unit’s Global Liveability Report. The city scored a perfect score for its health care and its infrastructure. Alistair Walsh (with dpa, Reuters) reports.

Hamburg is Germany’s most liveable city, according to an annual list published by the Economist Intelligence Unit on Wednesday.

For the second year running Hamburg came in 10th place on the Global Liveability Report, that ranks 140 world cities on various factors, including health, culture and environment, education, infrastructure, and stability.

Hamburg earned a perfect score of 100 for both its health care and infrastructure, and earned 94 points for its culture and environment, 92 points for education, and 90 points for stability. It earned a total score of 95.

The Hanseatic city was the only German city to make the top 10, with Frankfurt coming 21st, closely followed by Berlin at 23 and Munich at 24, with Düsseldorf managing joint-32nd place.

Hamburg the most stable German city

According to detailed breakdowns seen by Deutsche Welle, Hamburg was dragged down most by its stability indicators, but it was still deemed the most stable city in Germany.

Researchers said the prevalence of petty crime and violent crime in Hamburg were both “tolerable” – one rank beneath the top rating of “acceptable.”

It was marked down for its humidity and temperature, as well as for the discomfort that its climate caused to travellers.

Its private education institutions scored top marks, but the city was marked down for its public education indicators.

In everything else it scored perfectly, including transport, utilities, recreation and healthcare.

Next best city Frankfurt was marked down heavily for its stability rating. The prevalence of petty crime and violent crime were “tolerable,” like in Hamburg. But it was also marked down for the threats of civil unrest and terrorism.

Similar to Hamburg, it had points taken off for its humidity and temperature, but not for its climate-caused discomfort to travellers. Education was ranked the same as Hamburg.

Berlin, ranked 23, had the same points knocked off for stability and climate as Frankfurt, but it was also marked down for its quality of regional and international transport links.

In Munich, ranked 24, the stability ranking was similar, but the threat of civil unrest was deemed less likely. As in the other German cities, the public education was given a less-than-perfect score.

Munich also had points taken off for its quality of road transport, its quality of international and regional transport links, and for the availability of good quality housing.

Hamburg first cracked the top 10 list in 2016 after some world cities slipped in stability rankings for terror attacks within their city borders. Hamburg itself was besieged with violence this year as the host of the G20 summit.

The Australian city of Melbourne came on top for the seventh year running with a score of 97.5. Australia had two other cities on the top 10 with Adelaide tied for fifth and Perth at number seven.

The Premier of Victoria, the Australian state in which Melbourne lies, told Fairfax Media the ranking was a “win for all Victorians, who contribute so much to making Melbourne the best place to live in the world.”

Earlier this year the New York Times ranked Hamburg as one its must-see destinations.

The five cities that improved the most over the past five years were Tehran, Dubai, Abidjan, Harare and Colombo, but they all still remained in the bottom half of the 140.

The report is marketed to major businesses to help decide extra remuneration packages for its overseas executives.