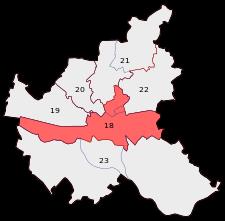 With the system being as it is, an independent candidate has little chance of getting into the Bundestag.

The current German voting system is a construct of the post-WWII period, using a diverse method in which voters are allowed to make two choices on the ballot sheet. A party must have a minimum of five percent of the total vote to get into the Bundestag. This is purposely done to ensure stability and to prevent insignificant and fragmented parties with irrelevant issues from entering the Bundestag, as once happened during the Weimar Republic in the 1920s prior to WWII. This year an estimated total of 61.5 million German nationals are entitled to go to the polls and cast their votes. The figures in here are provided by the Federal Statistics Office (Statistische Bundesamt). The office also administers the general election. Any party that seeks to take part must register with the office for approval. Registered parties need to have members across the country with a written statute and a political platform with an explanation of their mission which all adhere to the German constitution and democratic principles.

One sheet two votes to assign mandates
There are 299 constituencies (politische Wahlkreis) with each having approximately 250,000 inhabitants. A Party is allowed to field one candidate in each of the constituencies. Fifty percent of the Bundestag members are elected directly from the 299 constituencies, whilst the other half are from the list of the sixteen federal states in Germany. However, an independent candidate can also choose to run provided that he or she has accumulated a minimum of 200 signatures of eligible voters.

Currently the Bundestag has at least 598 seats. Each voter has two choices. The first choice, known as the Erststimme, is given to a favourite candidate of a particular district (Direktmandate). The second vote (Zweitstimme) is solely a party vote, given to a party listed on the federal level list (Landesliste), and this vote also determines the making up of the Bundestag, i.e. the percentage of seats allocated to each party. Candidates who happen to win the race in their constituency based on the first vote are directly voted into the Bundestag. However, a party which fails to reach the five percent threshold of second votes (Landesliste) but which has managed to win in three constituencies with the first vote (Erststimme), will also send representatives to Berlin. Nonetheless, circumstances may dictate a Parliamentary size increase during the process of allocating seats to Bundestag representatives. These are also known as overhang seats (Überhangmandate).

Putting it into practice
On Sunday September 24th 2017, sixteen parties have registered to compete both at federal and district level in Hamburg. For the Zweitstimme, besides the Christian Democratic Union/Christian Social Union (CDU/CSU, with Angela Merkel), Social Democratic Party (SPD) with Martin Schulz,  and the Free Democratic Party (FDP, with Christian Lindner), there are a number of parties with similar popularity, such as the Green Party (BÜNDNIS 90/DIE GRÜNEN, led by Cem Özdemir) and the Left Party (DIE LINKE, with Sahra Wagenknecht) and many others. These candidates are depending on the number of second votes to contemplate the chancellor’s seat. The second vote is for a party’s list for the federal level, which will also determine the party’s proportion of seats in the Bundestag as well as appointing the chancellor.

The Erststimme is for those representing their constituencies e.g. Hamburg Wahlkreis 18, also known as Hamburg Mitte. The candidates of the Wahlkreis 18 are Johannes KAHRS of the leading SPD in Hamburg, representative of the CDU, Christoph de VRIES, GRÜNE representative Meryem CELIKKOL, Martin DÖLZER of DIE LINKE, and the FDP, represented by Michael KRUSE, just to mention a few of the popular parties. The aims of these candidates are also to ensure their close relationship with voters as they head towards the Bundestag.

Nevertheless, representatives of the first vote are actually based on party preferences and overlook candidates’ personalities, i.e. prioritising the party’s programme and interest of their voters. The importance of the Erststimme has been undervalued. Looking at the numbers of constituencies involved, along with the possible number of seats in the Bundestag to be awarded, the first vote is equally as important as the second. But with the split voting, eligible voters can favour a coalition form of government on both local and federal levels.

Therefore, even without having a favourite candidate for chancellor, it is important to know that your visit to the polling station is a multipurpose act. Bearing in mind that voting is an opportunity to seek a better life, participation in voting activities will practically provide an important source of change. Some of the essential decisions are made in elections and will result in who gets elected as a representative into the Bundestag.