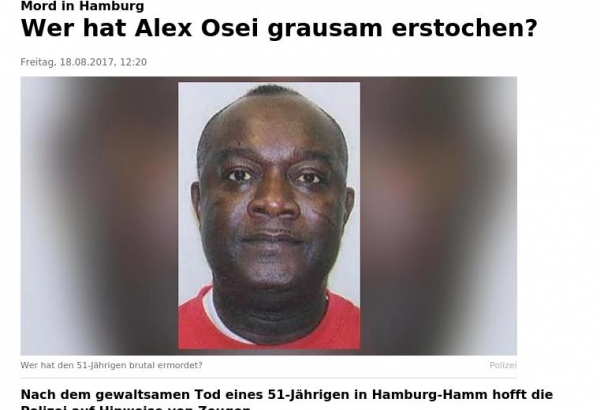 Developing story on the late Mr. Alex Osei(51) a.k.a Ofori whose lifeless body was found on August 12,2017, will shock you twice as much as his sudden death shocked the whole of Hamburg. The suspicions by his close friends, that he was killed by a fellow man out jealousy appears to be hearsay. But it seems Hamburg Police have confirmed who killed Mr Alex Osei.

The first suspect after his corpse was discovered, says the police, was his own neighbour Mr. Philip D. (51) with whom the deceased shared an Apartment at Hammerkirche in Hamburg. The deceased's neighbour was then arrested and interrogated only to be released a day after since there was no substantial evidence to prove that he did it.

The Hamburg police thereafter, went ahead with investigations for a long time to apprehend the perpertrator of this atrocious crime. After few weeks of indepth investigation, police have confirmed that traces of  Mr. Philip's DNA(neighbour of deceased) was found at the murder scene. They therefore have no doubts that Mr Philip D (51) is guilty of the murder of the late Mr Alex Osei a.k.a Ofori.

There are still grey areas with regards to the prime motive behind this gruesome murder.

Mr philip D (51)  has since Tuesday, 29th August,2017 been arrested and is in custody. He is said to have a criminal record on a few robbery incidences.

Question really is, is he really guilty as charged?

This is indeed a nefarious crime that should not only get us sad for the departed soul but also caution us to be mindful of who we allow to live with us or share an Apartment with.

Do you know who your neighbour is? Have you offended them in anyway? Are they involved in any dubious activity? Are you safe around your neighbour?

If your answer to the above questions are not positive, please do something about before the worse happens. Know who you live with, hold no grudges and live in peace with another. If you feel offended,  discuss if need be and appologise if you wrong.