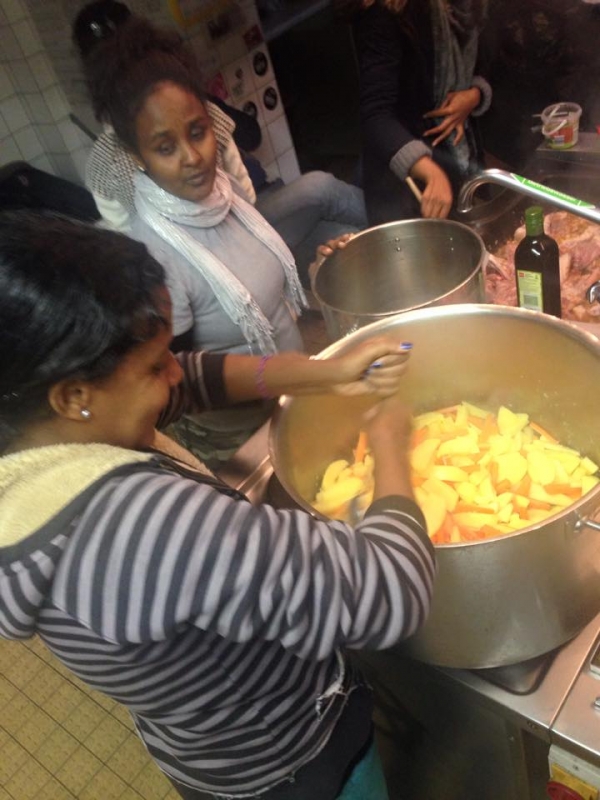 Not since the end of WWII has Germany received as many refugees as it did in the years 2015 and 2016. In both years, the country received roughly 1.2 million asylum applicants according to the Bundesamt für Migration und flüchtlinge (BAMF) (2017).

Following the massive influx of asylum seekers in the early 1990s, Germany amended Article 16 of the Basic Law which resulted in a significant decline in the number of asylum aqpplications for roughly two decades. But over the past couple of years, the legal walls have been unable to keep huge numbers of asylum seekers out as evidenced by the massive influx of Syrians, Afghans, Iraqis and many other foreign nationals into the Federal Republic, mostly fleeing from death and persecution.

Mixed Reactions
Reaction to the refugee influx by Germans was mixed. In 2015 alone there were an estimated 222 attacks on refugee hostels which resulted in only 4 convictions (Zeit Online, 2015). The refugee challenge also led to the rise of far-right wing groups like the Patriotic Europeans Against the Islamization of the West (PEGIDA). As the name suggests, the group`s chief aim is to curb the migration of people especially of the Islamic faith to Germany.

But by and large, the refugees were most warmly welcome at train stations where local citizens and non-citizens alike administered first aid: At reception centers where volunteers channeled their efforts and skills into shelters for the newcomers: In churches where members provided shelter and in some cases threw the weight of their institution against the deportation of refugees. And how could one forget the dozens of  Facebook pages with the phrase ``Refugees Welcome`` boldly written on their cover profiles? The magnitude of the love and support for the refugees at the heights of the crisis far outweighed the hostilities towards them and was only paralleled by the magnitude of the tragedy that caused their flight.

Responsibility
But the lion's share of the burden of integrating the refugees fell on the Government of the Federal Republic and its various Länder. Upon entering the Federal Republic, asylum-seekers are registered and kept at the reception facilities closest to their places of entry. To ensure their fair distribution among the various Länder, a mechanism known as the EASY system based on the Königstein key is used. The number of asylum seekers that a state (Länd) receives is calculated on the basis of its population and tax receipts. This is not only fiscally good for the various Länder, but it is also good for the asylum seekers for the simple reason that it allows them to be sent to places where they could be best absorbed.

The refugees with the best chances to stay in Germany are mostly individuals from unsafe countries of origin. They include Syrians, Iraqis, Eritreans and until recently, Afghans. Three areas of integration have been prioritized. These are language, labor market, and housing integration. Asylum seekers are housed in reception facilities or camps by the Länder during the asylum application process. They also receive benefits in kind and in cash, as well as roughly 700 hours of integration courses in German language, society, and legal system. They also benefit from a number of job training programs intended to boost their work experiences and supplement their relatively low vocational skills.

The Good
Participation in the integration programs has been high. According to the office for migration and refugees (BAMF), nearly 320,000 migrants began an integration course last year (most of whom were likely to have been refugees). In terms of job acquisition, 6% of refugees who arrived in 2016 have so far secured some form of employment and 10% of those who arrived in 2015 secured some form of employment by the end of 2016 (BAMF, IAB, SOEP, 2017). Believe it or not, these are impressive numbers considering the refugee`s low German language proficiency and vocational skills. The employment numbers are also expected to improve significantly over the next few years. There is also some noticeable progress in the area of accommodation. The number of refugees in emergency shelters has reduced significantly nation-wide. In Hamburg for instance, only 600 refugees remained in emergency shelters by the end of March 2017 (SPIEGEL ONLINE, 2017).

The Bad
Despite this progress, serious challenges still remain. Thousands of refugees continue to live in refugee camps. In Hamburg alone, roughly 6,500 refugees lived in initial reception facilities as recently as March 31, 2017 (Spiegel Online, 2017). Progress in social housing projects has been slow across the country and landlords have been reluctant to rent their buildings to refugees. Added to this is the general housing shortage facing the nation. All of these factors have combined to impede the ability of many refugees including those among them who are both employed and German language proficient to fully integrate into the larger society.

On the job front, it was obvious from the beginning that without the German language, integration into the labor market will be impossible. However, language integration has been slow for both structural and practical reasons. Structurally speaking, refugees from safe countries of origin do not have a good chance to stay and by law are not entitled to integration courses. They include Ghanaians and surprisingly Afghans. In the event that many of them end up staying, their language integration - and overall integration - will be delayed by the existing legal restriction. On the practical side of things, sources tell me, conditions in the refugee camps are not conducive to learning and the quality of teaching is often times very low. As one source in Hamburg puts it, ``all you need is a certificate that says you can teach. Nevermind the experience or knowledge about the culture of the people you are going to be working with.``

There are also differences in terms of education among the migrants. Those from Eritrea for example, are relatively less educated and therefore less familiar with a structured learning system. As a result, sources say, their language skills development rates have been relatively low compared to other migrants. But in general, progress on the German language front has been slow for all refugees and their labor market integration has suffered as a result. However, low German language proficiency skills alone does not explain all the employment struggles. Overall, the refugees possess low levels of education and vocational training. The long asylum application process and lack of legal certainty over the future status of many of them have made it difficult for firms to invest in their training.

In order for the refugees to be fully and properly integrated into the labor market and society of Germany, more must be done. Class sizes, composition, and teacher quality must improve. Legal certainty over their status must be created, companies must be incentivized to train and employ refugees, and landlords and tenants must be talked into cooperating with them.

What you can do
So much is expected from the government - and sometimes rightfully so. However, individuals - especially from the African community here in Hamburg - could also make a big difference. Now that the massive wave of support for the refugees has subsided, individual involvement is most crucial. ``There`s so much they could do`` says Asmara Habtezion, a German-Eritrean and founder of the Amaras World Refugee Support (AWRS) based in Hamburg. AWRS caters mostly to refugees from Eritrea and has been in existence for more than 2 years. Miss Habtezion`s volunteer-based work mostly involves translating legal documents for the refugees, taking them to the job center, teaching them German and English, and providing them with emotional and psychological counseling. It is in these areas that she mostly needs help; ``It doesn't take much. Just every once a while for one or two hours of people's time. They [refugees] are shy and lack confidence, so they need someone to mediate their interaction with folks at the job center for example. But after one or two times, they are normally able to help themselves and their fellow refugees.``