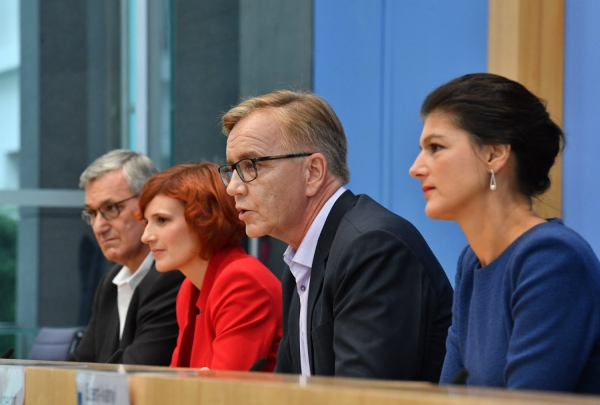 Die Linke (the Left Party) managed to improve their share of the vote marginally in the national election at the end of September. But dispute over refugee policies is leading to civil war inside the party.

While the number of refugees arriving in Germany has long since dropped to a trickle, the mass arrivals in 2015 and 2016 are still reverberating through German politics. That can be seen in the coalition talks, set to kick off formally, negotiations are set to turn on the disputed notion of an “upper limit” on asylum applications. It can also be seen in a bitter fight currently taking place within Die Linke.

One might think that the party which sits on the far left of the Bundestag (German parliament) would find it easy to speak with one voice on refugees. Their young, urban supporters loudly call for open borders under the slogan “kein Mensch ist illegal” (no human is illegal), and Die Linke have railed against deporting asylum seekers to Afghanistan. It’s far from so simple, though. In the national election on September 24th, Die Linke won their second largest ever share of the vote at 9.2 percent, but a clear border cut Die Linke’s vote between former east and west Germany.

At first glance Die Linke - the successor to the east German communist party - are still a party of the east. In most east German states they won between 15 and 20 percent of the vote. In the former west they were languishing on between 5 and 7 percent.

But there is a more interesting pattern underneath. In every single constituency in western Germany Die Linke improved their vote share, while in every east German constituency they lost votes. To make matters worse, they lost their votes predominantly to the Alternative for Germany (AfD), the far-right party that has made hay by denouncing the government’s refugee policies.

For some in Die Linke the answer to why they leaked 400,000 votes to the AfD is obvious. Sahra Wagenknecht, faction leader in the Bundestag and their most high-profile politician, has repeatedly warned that the party weren’t listening to voters’ concerns over refugees.

SEE ALSO: Will Merkel's concession on a refugee cap help her form a new government?

“I kept hearing during campaigning that people find what we are doing great but they won't vote for us because of our stance on refugees,” she said when analyzing the election defeat. Wagenknecht’s husband, Oskar Lafontaine, one of the party elders, described the party’s refugee stance as “mistaken.”

Only a minority of refugees manage to make it to Germany - more people would be helped when the billions spent on them in Germany were used “to fight illness and hunger in poor parts of the world,” he argued in a Facebook posted earlier this month.

Lafontaine then had a dig at the party's chair people, Katja Kipping and Bernd Riexinger, both advocates of a pro-refugee policy, by pointing out that they lost votes in their constituencies.

For others in the party, Wagenknecht and Lafontaine are committing heresy. Former leader Gregor Gysi has threatened to quit the party if its adopts their position on asylum. Chairwoman Kipping flatly stated that “when we follow a course to the right on refugees we risk ruining the credibility of Die Linke.”

She argued instead that the election result should be seen as positive, as the party had won over “cosmopolitan, mobile, urban voters.”

Now some party colleagues are reportedly scheming to oust the telegenic and opinionated Wagenknecht out of the party leadership. Party chairman Riexinger recently confided to colleagues in a bar that “Sarah is hard to push out, you can’t just shoot her down,” according to Bild. He instead proposed constantly criticizing her until she left of her own accord. Riexinger has denied making the comment.

Others in the party argue that their losses in eastern Germany have less to do with the refugee crisis than the fact that they are now seen as part of the establishment.

“We need to take seriously the fact that unemployed people have voted for us in much smaller numbers,” said Dietmar Bartsch, Wagenknecht's co-leader in the Bundestag. “I’m not so sure that it was about the refugee crisis above all,” he said, adding that voters in his constituency in northeast Germany told him that “you don’t understand us anymore.”

As part of the government in three states, Die Linke are now seen as mainstream by people on the margins of society, Bartsch claimed. Things are set to come to a head at the upcoming party convention in Potsdam, when the new caucus leadership will be elected.

On Tuesday, Wagenknecht threatened to quit her leadership role, citing constant infighting as damaging for her health and accusing Kipping and Riexinger of "not being prepared to work fairly."

Whoever wins the power battle will likely determine how popular the party remain in the east, and how many voters they can expect to retain in the west.