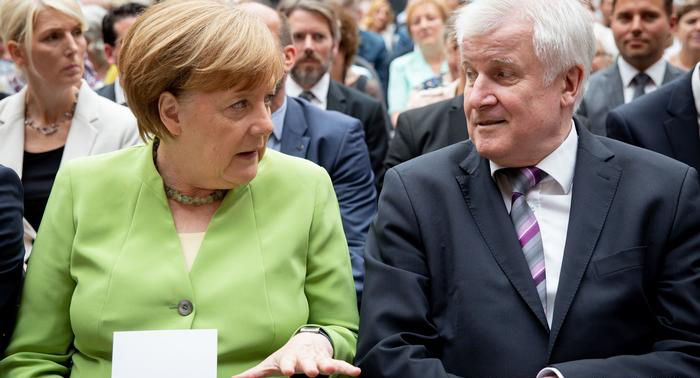 Germany’s third grand coalition under Chancellor Angela Merkel is in turbulence as its Christian Democratic sister parties are at odds with each other over immigration. Felix Janssen from FTI’s Berlin office explains it all:

Before the new coalition government had even begun to govern, it had already secured a record. 171 days – no government building in German history had ever taken so long. The arduous path to return to Handlungsfähigkeit (German for “capacity to act”) led right back to the third edition of the grand coalition under Merkel. But the government formation hardly proved a return to the normality of governing. The world has changed for Merkel who is stuck between strong-headed men driving her to seek refuge with Macron and Europe.

Throughout Europe the right-wing, anti-establishment has wreaked havoc to political norms and structures, often to the detriment of social democrats. The Dutch labor party dropped from 24.8% to 5.7%, France’s socialist party only came in 5th and lost a whopping 250 seats in the election, and Italy formed a populist governing coalition after the social democratic party lost 180 seats earlier this year. The same pattern holds true for Germany. The once proud SPD received the worst election result in their history.

These new dynamics fundamentally changed the coalition negotiations. The new German parliament consists of six parties for the first time since the Weimar Republic which severely limited coalition constellations. After the liberal FDP blew up the four-party “Jamaica” coalition negotiations, Merkel had to make significant concessions to the reluctant SPD, in order to get them to agree to a new grand coalition. In the last 100 days, the SPD has continued their tumble, so they will have to fight even harder to distinguish themselves from the CDU, or risk extinction.

Surprisingly (or not), the SPD is not the coalition partner Merkel has to worry about. Instead, and driven by the upcoming Bavarian state elections in October, the conservative CSU, Bavarian sister party of Merkel’s CDU, led by newly appointed interior minister Horst Seehofer has tested the limits of the coalition. Seehofer and the CSU want to turn away refugees at the German border who already registered elsewhere in the EU. Merkel on the other hand strongly opposes a national solution, fearing that it could push the EU to the edge of dissolution.

After days under fire, Merkel managed to receive two weeks to find a European solution. However, the support she gathered from her own CDU is not substantive but merely procedural, as the CSU appeared to be ready to authorize Seehofer to issue a decree for border controls with immediate effect. If this happened, it will undoubtedly lead to Seehofer being fired as minister, the resignation of the other two CSU ministers, and the effective dissolution of the governing coalition. It seems that the specter of 2015, when Merkel opened German borders to refugees, will continue to haunt her chancellorship indefinitely.

But not only the situation at home is precarious. Across the Atlantic, her most delicate frenemy is sitting in the White House. The scandalous G7 summit is only the most recent of a series of trust breaches by President Trump who has continued to uproot the international post war order. The Paris Climate Agreement, tariffs on cars and the Iran nuclear agreement have burdened the transatlantic relationship. The silver lining of the quickly deteriorating diplomatic relations is the unifying effect for Europe. The bitter diplomatic disappointments are crowding the EU nations closer together and even the typically more reluctant CDU is striking different tones in their European policy. Recently, Merkel even spoke of a new loyalty toward Europe and has begun to get the German people used to deeply unpopular military spending increases.

After she kept Macron waiting for eight months, Merkel finally responded to his reform program and was welcomed with open arms by her French counterpart. Unsurprisingly so, considering that both stand to gain from reinvigorating the French-German motor in Europe. Merkel finds herself in an unusual role. Should she not be able to find a European solution in the next two weeks she will likely be the one displaced from her own governing coalition. She has no other choice but to seek refuge in Europe.

The views expressed herein are those of the author(s) and not necessarily the views of FTI Consulting LLP, its management, its subsidiaries, its affiliates, or its other professionals, members or employees.