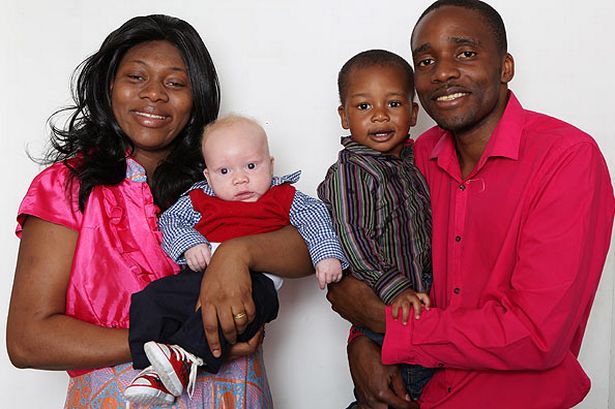 This African couples have amazed medical experts after their baby daughter was born with white skin, blue eyes and blonde hair. Benjamin and Angela Ihegboro's daughter, Nmachi, has confused genetic experts who are unable to explain why she looks the way she does.

Doctors say the white-skinned newborn is not an albino. The blonde, blue-eyed girl's Nigerian parents say they don't know of any white ancestry in either of their families.

The British couples are both of Igbo Nigerian origin and have dark skin. Father Ben Ihegboro, 44, a customer services adviser, admitted that when he saw the baby he shouted “What the Fuck?' before asking “is she mines?'

Doctors at Queen Mary hospital in Sidcup insist that Nmachi - whose name means 'beauty of God' in the couple's native Igbo language is not an albino.

Her baffled parents, who already have two black children, just 'sat and stared' at their white baby when she arrived, they told the Sun Newspaper. 'We both just sat there after the birth staring at her,' said Mr. Ihegboro. Mum Angela said: 'She is beautiful, a miracle baby.'

Despite jokingly asking whether he was the father, Mr. Igegboro said: 'Of course she is mine. 'My wife is true to me. Even if she hadn't been, the baby wouldn't have looked like that!' Pale skin genes can skip generations but neither Ben nor Angela Ihegboro - who only moved to Britain five years ago - know of any white heritage in either of their families.

'She doesn't look like an albino child anyway,' Mr. Ihegboro said. 'Not like the ones I have seen back in Nigeria or in books. She just looks like a healthy white baby. 'My mum is a black Nigerian although she has a bit fairer skin than mine. But we don't know of any white ancestry.

'We wondered if it was a genetic twist. But even then, what is with the long curly blonde hair.' The couple also have an older daughter, Dumebi, two, and a son, Chisom, four. Mr. Ihegboro said the couple's son was even more confused than them.

He added: 'Our boy keeps coming to look at his sister and sits down looking puzzled. 'We are a black family. Suddenly he has a white sister. 'But all that matters is that she is healthy and that we love her.'

Skin color is believed to be determined by up to seven different genes working together. If a woman is of mixed race, her eggs will usually contain a mixture of genes coding for both black and white skin. Similarly, a man of mixed race will have a variety of different genes in his sperm. When these eggs and sperm come together, they will create a baby of mixed race. But, very occasionally, the egg or sperm might contain genes coding for one skin color. If both the egg and sperm contain all white genes, the baby will be white. And if both contain just the versions necessary for black skin, the baby will be black.