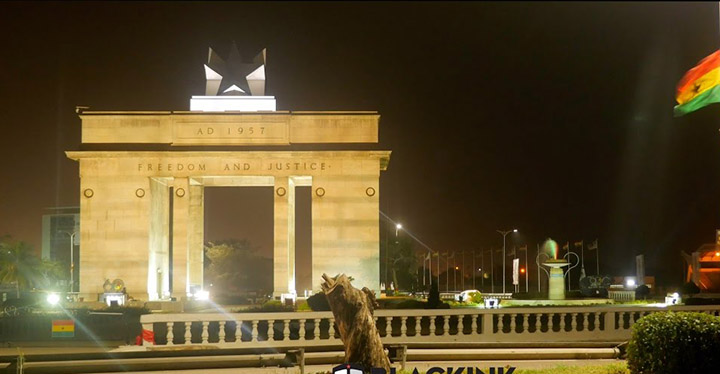 Nigerian born Chibundu Onuzo is the author of 'The Spider King's Daughter' (Faber, 2012.) The novel has won a Betty Task Award and been shortlisted for the Commonwealth Book Prize. She recently visited Accra, Ghana for the first time and fell in love with the city. Below is her narative:

With only a 45 minute flight separating Lagos and Accra, you'd think I'd have been to Ghana at least once in my 22-year existence. Unfortunately until July 2013, the concepts holiday and Africa have never gone together in my head.
Holiday was Italy and structurally unsound towers; or America and discount shopping or France and baguettes. Not Ghana, longstanding "frenemy "of Nigeria, with the football team we all rooted for in the last World Cup. Yet, that's no reason to actually visit the place.

I went for a family wedding. If not for love, perhaps another 22 years would have passed before I made it to Accra. The first thing that struck me almost as soon as I stepped off the plane was the manner of the people.
Now I know it is hackneyed and passé and terribly clichéd to praise the hospitality of the locals and so I make the next statement knowing that I tread on imperial ground: Ghanaians are nice.

The friendly coconut seller in the photo to the left is just one of the myriad of fresh produce vendors that are dotted around the city. You spy a coconut, you pick a coconut, he splits the coconut and you drink the water out of it, right there and then on the roadside. No preservatives, no plastic bottles, just coconut.

I've often wondered why the global indexes drawn up only rank things like "Ease of Doing Business" or "Democracy," with criteria that leave African countries nearer the bottom than top. If only someone would draw up a ranking for Fresh Produce Consumption.

This love of fresh food was on one occasion, however, taken to a rather bizarre extreme. My hotel restaurant didn't have half the dinner menu because the necessary ingredients were always bought fresh from the market and the market was closed!

Speaking of hotels, due to exceptionally bad planning, I found myself staying in three hotels over eight nights. The last, The University of Legon Guesthouse, was the best value for money. For $60 a night, I got an air-conditioned ensuite double room, beautifully landscaped grounds, the fastest internet I have used in West Africa and reasonably priced meals in the restaurant.

Now, as an original Lagosian, I haven't been to a place unless I've gone shopping in a place. I hit Oxford Street, Osu, on my second day in town. It's a roadside market that caters to the cravings of an ankara lover like myself, or 'African print' to those not quite in the know.

However, for more upmarket shoppers who want their air-conditioning and shopping trolleys, there's the Accra City Mall in East Legon where Ghanaian designers sell their work alongside international brands. In my humble opinion, local content was winning but I'm a little biased.

There are of course conventional touristy things to do in Accra. For the reasonable sum of six cedis, you can enjoy The Kwame Nkrumah Memorial Park, final resting place of the first President of Ghana. It's a serene venue for contemplation. The museum on site sheds some light on the man behind the leader that was a pivotal part of the independence movement in Africa.

Yet I also like to see the places not fashionable enough for the beaten track, places that probably wouldn't make it into a glossy tourist brochure. Ghana, beautiful as it is, is still a developing country. There are shopping malls and skyscrapers -- one born every minute -- but there is also Nima, where I met a lady who chops firewood every evening to cook her meals

I had open access to Nima thanks to the organization Invisible Borders and their partnerships in the area. Perhaps not all the Millennium Development Goals have been met in Nima but there were other signs of development that international agencies don't often look for. I had my first private art viewing in Musa's studio in Nima. Only a stone's throw away from that was a photography exhibition in Nima Roundabout.

It wasn't all sightseeing and games though. I also went to Accra for the very serious business of book promoting. I've never been on radio in West Africa. It's no different from being on radio in England except the presenters on Joy and Citi FM understood my accent.