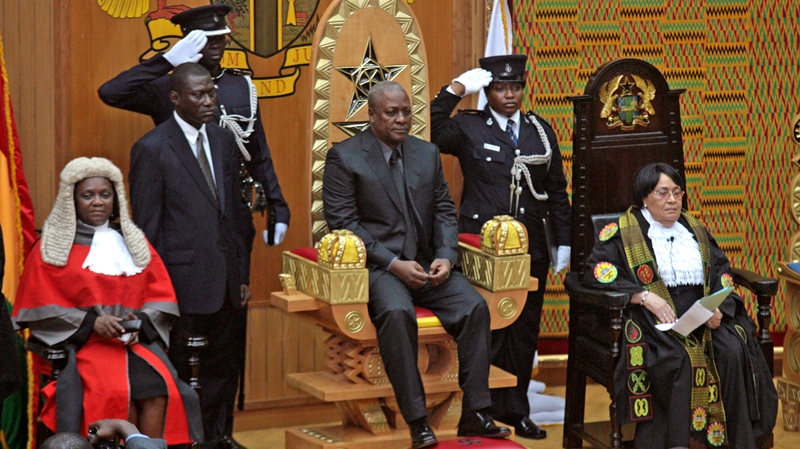 Ghanaian President John Mahama is due to be sworn into office following a disputed election victory last month. Mr Mahama, who became acting president in July, has called for unity ahead of the inauguration, appealing to rivals who contested the 7 December result.

Official results gave Mr Mahama 50.7% of the vote, enough to avoid a run-off against opposition candidate Nana Akufo-Addo, who won 47.7%.

The biggest opposition group is expected to boycott Monday's ceremony.

Mr Mahama was Ghana's vice-president until the unexpected death of President John Atta Mills in July.

He has served since then as acting president.

Ghana is regarded as one of Africa's most stable democracies and is one of its fastest growing economies.

Ahead of his inauguration, Mr Mahama appealed to members of parliament to work together.
"For the long-term survival of our nation, we must agree and commit to a multi-partisan process," he told them on Friday.

"Whatever our differences, whatever our politics, we must pull together and rise to meet these challenges."

Mr Mahama is due to be sworn in before 11 African heads of state, the BBC's Sammy Darko reports from the capital, Accra. Officials from the US, China and the UK will also be there.

But Mr Akufo-Addo's New Patriotic Party (NPP) is expected to boycott the ceremony.

The NPP filed a petition over the election result at the Supreme Court in late December, saying it had found irregularities including unregistered voters casting ballots.

Mr Mahama's National Democratic Congress (NDC) said the elections were the most transparent the country had seen.

International election observers described the 7 December poll as free and fair. Ghana's government says the presence of international leaders at Monday's ceremony is an endorsement of the vote.
BBC