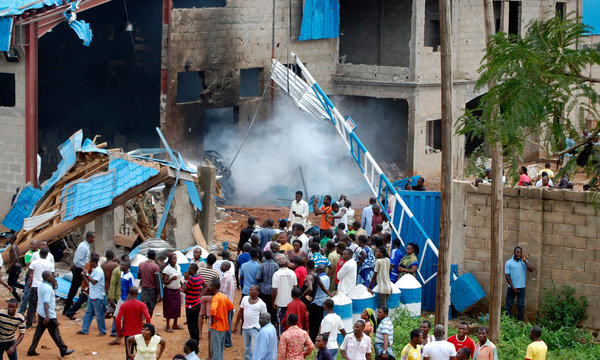 At least 12 people died in northern Nigeria when attackers raided two churches during Christmas Eve services, police said. One assault occurred at the Church of Christ in Nations in Postikum, in Yobe province. Gunmen attacked worshipers during prayer, killing six people, including the pastor, and setting the building on fire

Worshipers also were attacked at the First Baptist Church in Maiduguri, in Borno state. A deacon and five church members were killed.

They were the latest strikes against Christians in the region. More than 30 people died in a wave of Christmas Day attacks in the north last year, blamed on Boko Haram, a militant group that has targeted Christians and Muslims it considered insufficiently Islamist.

Pope Benedict XVI referred to the northern Nigerian violence in his traditional Christmas message from Vatican City on Tuesday.

"Savage acts of terrorism" in the region, he said, "continue to reap victims, particularly among Christians."

"Suspected members of the group have bombed or opened fire on worshipers in at least 18 churches across eight northern and central states since 2010. In Maiduguri, the group also forced Christian men to convert to Islam on penalty of death," it said.

It is not immediately known whether the group was behind the latest attacks.

"Sometimes, challenges make people doubt the sincerity of government, but I am confident that God knows everything," he said Sunday.

But residents told CNN that despite assurances of security, they have been attacked again.