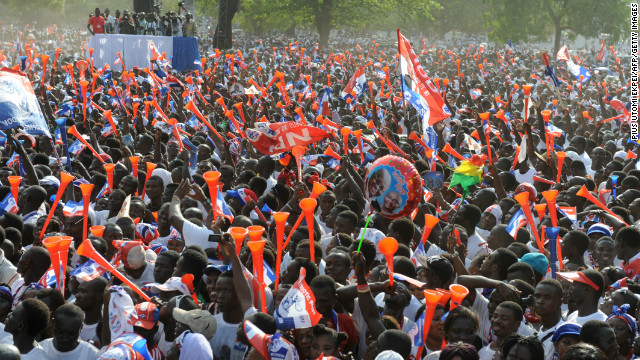 Ghanaians vote Friday in a general election that pits the incumbent leader against the son of a former president in one of Africa's most stable democracies.

The west African nation is hailed as a beacon of peace and democracy in a region beleaguered with coups, conflicts and civil wars.
Incumbent leader John Dramani Mahama, a former vice president who took over after his predecessor died this year, is one of eight contenders vying for the top position.
The pool of candidates includes opposition frontrunner Nana Akufo-Addo, the son of a former president.
Polls predict a tight race between the two main contenders. It mirrors the last election four years ago in which Akufo-Addo lost to John Atta Mills with a razor-thin margin after a runoff. Atta Mills died of an unspecified illness in July .
If no presidential candidate wins a majority of the vote in the first round, a runoff is scheduled later this month.
Election fever was high, with lines snaking around polling stations.
"People started lining up at 5 p.m. and spent the night at the polling stations," said Delalorm Sesi Semabia, 25, an oil company employee who lives in the capital of Accra.
"People are enthusiastic," he said. "This particular election is significant because candidates had debates on air and people heard their thoughts on issues. It made a huge difference, it created more passion."
Semabia said a lot of young voters were born in the post-coup times, and want the democracy trajectory to continue.
"We have a passion for our country because we only have one Ghana, " he said. "We don't think of elections as an end-all game. We think of it as an opportunity to progress."
As passions ran high, the president warned that undermining peace will not be tolerated and urged candidates to ensure supporters avoid incitement.
"Ghana has organized five previous successful elections, and there should not be any reason why this year's election should not be successful," the president said in a statement.
Political parties are demanding that the results be released within 72 hours after polls close Friday, an expectation the electoral commission shot down.
"We will not be limited by any timeline to announce the presidential results, but will work within reasonable time," said Kwadwo Afari-Gyan, chairman of the electoral commission.
Ghana is one of Africa's fastest growing economies, with the world's big gold mining companies operating in the nation.
It is the world's second-largest cocoa producer after neighboring Ivory Coast and the continent's biggest gold miner after South Africa, according to the United Nations.
The international community hails Ghana as a success story in the region, with U.S. President Barack Obama visiting the nation in 2009 in his first presidential trip to Sub-Saharan Africa.
At the time, Obama bypassed his father's native Kenya and opted for Ghana, describing it as a beacon of peace and democracy in the continent.
"There's sometimes a tendency to focus on the challenges that exist in Africa," Obama said this year. " But I think it's important for us to also focus on the good news that's coming out of Africa, and I think Ghana continues to be a good-news story."
But critics say that despite the rich resources, raking in billions of dollars annually, the wealth is not trickling down to the rural poor who live on the land where the gold is mined from.
"Mining goes with a lot of myths, like it creates jobs, it brings development, it makes people's lives better," said Daniel Owusu-Koranteng, a Ghanaian activist and founder of the Wassa Association of Communities Affected by Mining. "That is the first deception: that you are sitting on gold and somebody is going to mine it. You cannot imagine for once the person can take the gold away and leave you in a bad state."
Ghana was among the first African countries to gain independence from the British in 1957. It endured a series of coups before Lt. Jerry Rawlings took power in 1981. A decade later, it transitioned to a stable democracy with multiparty elections.
Unlike its neighbors including Ivory Coast, Ghana has held successful elections and power transfers since 1992 without descending into bloody chaos.
In addition to the presidential election, hundreds of candidates are vying for 275 parliamentary seats.
This election marks the first time the nation of 25 million will be using a new biometric voter identification system.
CNN