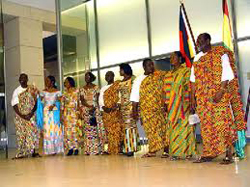 The 1st of June was a remarkable day for the Ghana Community in Hamburg. It was the day Ghanaians living in Hamburg and Ghana’s Ambassador Berlin, Mr.Paul King Aryene sat down to discuss and interact over some important matters confronting the community.

Issues ranging from Ghana Identity, Dual citizenship, immigrations matters and new Passport amongst others were mapped out for settlement.

On that very day the Ghana community were expected to troop out, but it turned out information did not reach many on time as confessed by few in the meeting. However, a sizable number of the community turned out to meet their number one citizen in Germany.

The meeting was billed to start by 7.30pm and end to 10 pm according to the official notice. As a reporter with TopAfric radio Hamburg, I was there with a clear mission to ascertain the report of the interaction and to ask some few questions myself. That led me to arrive on time and to take a vintage position to measure the heart of the evening gathering.

At exactly 7.30pm two persons I suspected were the embassy officials quietly walked in a manner that appears keeping at a distance, if not superiority. Truly I had expected the atmosphere to change on the arrival of the Ambassador at least to some kind of warm-hand shaking and welcoming between the “Oga” and his subjects. But that was not the case as the exchange was nonchalant.

However, after the MC introduction of the Ambassador He quickly announced a time cut from the earlier time scheduled for the meeting to last. In his words" We are sorry to inform you that we will not spend much time as our attention is needed back in Berlin urgently that we have to take the next train by 9pm back"

This announcement in my observation elicited anxiety as people were seen heard face down muttering and asking question like "why didn’t he postponed the meeting if he had such an emergency at hand".

Apart from that, the meeting went on as planned. He quickly introduced himself and gave some guidelines and advices to some of the issues top on the agenda. He talked about Acholism, Gambling and retirements problems including the much touted Ghana Diaspora Unit at the Ministry of Foreign Affairs.

Thereafter followed Question and Answer section.Undoubtedly people who are pressed and pressured by with one problem or the other were visibly angry, to the point of almost inpatients to get their question across. I took exception to one young man who consistently was asking the Ambassador what the Ghana Government Accra is doing to assist Ghanaians living in Germany since they in Diaspora are equally tax payers contributing to the economy through remittances...

While everybody was eager to get their question to him, I had waited to get chance to ask only one question about the issues of hundreds of African immigrants stranded in Hamburg and some part of Germany for months. My question would have been to get first class information regards to what the embassies of Ghana and Nigeria are doing to assist reduce the shame and stress these our brothers who are mainly Nigerians and Ghanaians are going through.

Unfortunately and to my consternation, the chance to ask that question didn’t come as Mr.Ambassador Paul King Auyrene left the hall unannounced with more than half of the people who wanted to ask question holding their mouth open.

Nonetheless, the town hall meeting continued after the Ambassador left. As usually many unsettled issues came back to the fore with members and their executives squaring up matters.

I left the hall unfulfilled wondering when Africans elites and their subjects will embrace the reality and responsibilities of the leadership/fellowship alike.

Finally, I cannot end this article without making reference to an obnoxious question put through to the Ambassador by Mr, Anthony Rau, a member of Ghana community concerning the Ghana dual citizenship. According to the politician, he wanted to know why Ghanaians cannot have dual citizens when Nigerians regarded 419ers and Gambians people have it.

As a reporter of Nigerian extraction, I had to contend my calmness hearing such gibberish from an African Brother. Though I expected the Ambassador would have vehemently condemned this guy in the strongest term. Well, he didn’t react talk less of rebuking him likewise any other person in that hall.

This is not to say that I am unaware of the level of prejudice and petty grievances amongst we Africans but the occassion, time and the place of such comments was totally unwarranted and uncalled for;

Being a strong advocate of United African Community in Germany, I make bold to condemn that comment and equally sued for caution on how we malign our neighbours from the other divide to avoid sentiments capable of eroding the chances we stand to build a better African community in Germany.

# Margery 2019-05-01 12:37
Hi. I have checked your topafric.com and i see you've got
some duplicate content so probably it is the reason that you don't rank high in google.
But you can fix this issue fast. There is a tool that generates articles like human, just search
in google: miftolo's tools