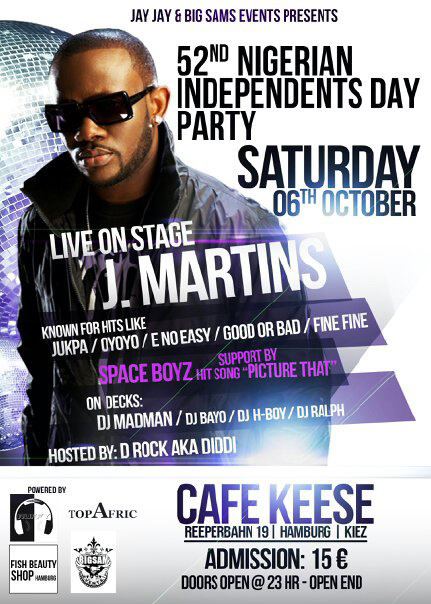 Saturday, October the 6th, 2012 will be a night to remember in Hamburg, Germany.  All thanks go to Big Sam. Why? Because He in collaboration with Jay Jay will be bringing one of Africas biggest Afro pop star Jmartins to perform his hits in celebration of the 52nd Nigerian Independence Day.

Although Nigeria, The Giant of all African Nations, officially celebrates its independence from British rule on the 1st of October, the party continues here in Hamburg on the 6th of October at the Cafe Keese.

Big sam is originally from mumbasa, Kenya his real name is Sammy Ngura, this young man has been promoting alot of shows around Germany for over 10yrs. His hobbies includes listening to music, swimming, promoting, and dancing.

Tony Air, Presenter of the Whats Up Naija Show on TopAfric Radio, interviewed him at the TopAfric radio station office. Tony will be giving away free tickets to the listeners of the whats up naija show which airs every thursday from 8pm - 10pm german time.  tune in  and  win tickets by calling 040 254 91970

You will also get a chance to win a free dinner at Adeola Bistro on the whats up naija show in celebration of the Nigerian Independence Day.