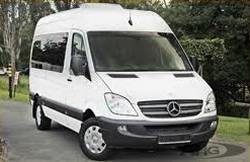 The Germany Branch of the New Patriotic Party (NPP) has presented a 12 Seater Mercedes-Benz Bus valued at €20,000 to the Party Headquarters in Accra over the weekend.

The National Chairman of NPP-Germany Mr Dwamena Yeboah who made the presentation explained that the donation is the Germany Chapter´s contribution towards the 2012 elections campaign saying “This is our widow´s mite towards the execution of a successful electioneering battle which we are confident of winning”.

According to him, NPP-Germany has supported the party in various ways in the past and would continue to do so because of the conviction that the NPP is the only party in Ghana that has the right policies to move the country forward arguing that the eight-year rule of President Kuffour testifies to this fact.

Recounting some of the major achievements which included the NHIS, School Feeding Program, Capitation Grant, Free Maternity Care, the discovery of Oil, the Construction of the Bui Dam, the expansion of road network and Rural Electrification, Mr Yeboah assured Ghanaians the NPP would deliver on its promise of providing free senior high school.

He declared “Our record between 2000 and 2008 demonstrates that we are capable of delivering on our promise to the people of Ghana because the NPP has been blessed with competent, committed and visionary leaders capable of spearheading the transformation process”

He announced that over 150 party supporters from Germany have volunteered to travel to Ghana to assist in the campaign in their various constituencies and localities and said this underscores the level of patriotism and determination of Ghanaians in the diaspora to contribute to the country´s political and democratic development.

Mr. Boakye Agyarko Manager of the Akufo-Addo campaign who received the keys to the Bus on behalf of the party thanked the Germany Chapter for their continued support and gave the assurance that the party is working very hard to ensure a one-touch victory come December 7

Present the ceremony were other senior party officials including Mr. Charles Owiredu Director of External Relations.

In another development Mr. Dwamena Yeboah had earlier made a personal donation of a Fiat Ducato Pick-Up costing €18,000 to Eastern Regional Branch of the New Patriotic Party (NPP) in Koforidua.