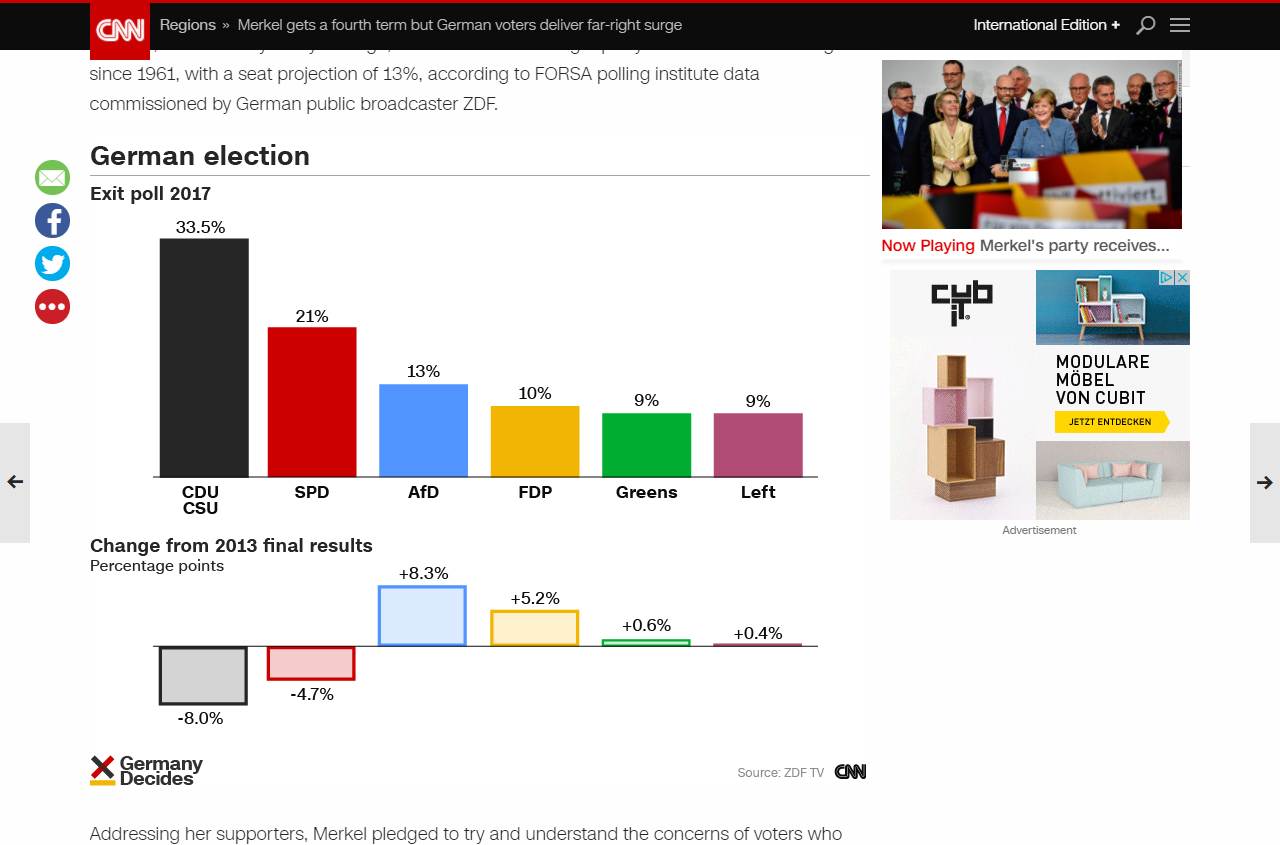 Chancellor Angela Merkel’s CDU party won the national election on Sunday by a clear margin. But they scored their worst result in almost 70 years, as the AfD had a night to remember. We're packing it in for the evening. Just like the campaigning itself, German elections are over with much less fuss than those in the UK and US... except for the fact that coalition building could take months.

Exit Polling shows Angela Merkel is set to become German Chancellor for a fourth time, as her party won a double-digit victory over their nearest rival. She seems pleased with the result, describing it as a good result after "an incredibly difficult legislative period."

The far-right Alternative for Germany (AfD) scored a better-than-expected result in the exit polls, set to win 13 percent or higher and thus become the third largest party in the Bundestag. Polling stations closed at 6pm, and exit polls immediately showed the Social Democrats (SPD) had slumped to a historic low in support.

The SPD have already ruled out joining another coalition, something other parties have called irresponsible. The only other possible coalition is Merkel's Union joining up with the Free Democrats and the Greens. But big ideological differences between the parties mean we might not have a new government until the new year.

9.20 - Merkel ‘optimistic’ she can build coalition before Christmas

There was no love lost between the Green Party and the Free Democrats (FDP) during the ARD TV round table, with FDP man Christian Lindner accusing the Greens of being idealistic and not realistic. Green party head Katrin Göring-Eckardt replied that she would put the environment at the centre of any coalition agreement, adding that she saw little common ground with the FDP. If a coalition is to be built though, it will most likely involve these two parties.

But Merkel finished the show by saying that she was “optimistic” she could build a coalition by the end of the year.

“Power lies in calmness,” she said, repeating the idea she had put across through the evening i.e. that when all the parties had had a good night's sleep they would see everything differently.