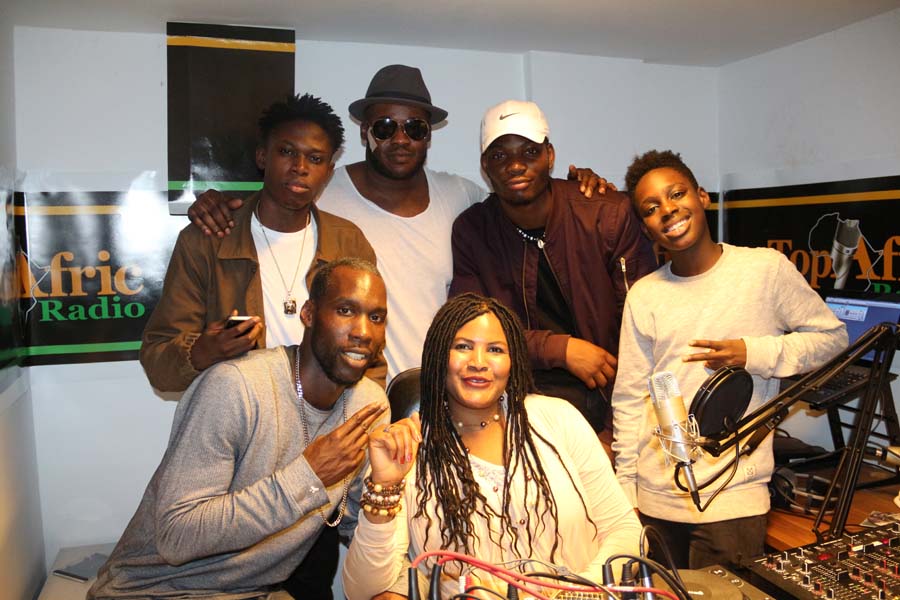 The Setting; Hamburg. The Story; Touching.  The Crew; Young, Dynamic and Multi National. It was quite interesting talking to these guys because they were so full of energy and life and most of all, they are so hopeful that this is going to take them to places. The group of five youngsters led by the Bradley Iyamu a.k.a Young CRhyme a Hamburg based artist. After a short round of introductions, the show kicked off proper.

QUESTION: Bradley I know you as a musician; a singer, rapper and songwriter, how did you come about the idea of the?

BRADLEY: I’ve always wanted to do a movie because I actually did my first movie some years ago. It was a short movie sponsored by Hennessy.

QUESTION: This is the first ever black movie in Germany, we know how difficult it is for singers and actors of coloured to breakthrough here, how did you manage it?

BRADLEY: Well, it wasn’t easy but I was adamant about what I want to do and once I set my mind on it, I just do it. I talked to some guys with whom I worked once for sponsorship and they were keen and that´s how it all came to be.

Question: Have you guys acted before or this is your first time?

PRINCE: Yes I acted the role of Simba in The Lion King. The musical in Hamburg. Steve: No I have not before. This is my first said Robert and Bortey too.

QUESTION: How does it feel like to be on set?

STEVE: Initially it wasn’t easy. I was nervous but as time went on, I relaxed and it came easily.

QUESTION: Can you tell us a bit about the movie?

PRINCE: Hakeem’s friends mistakenly broke the present his father bought for his mother and they have 24 hours to replace it so they went into the streets of Hamburg in search of money to buy a new present for Hakeem’s mom and in the course of doing so, they got themselves involved with some bad guys who loaned them money that they had to pay back in 24 hours and since there was no other way to make the money other than do some dirty deals which took them on an adventurous journey.

QUESTION: In the course of shooting, did you meet real bad guys? The ones you wouldn`t want to be acquainted with on a good day?

BORTEY: Though the movie was shot in the parts of Hamburg referred to as the ghetto because that’s where a lot of shady activities take place, we didn’t get to meet any bad guy, moreover the area is not as people tend to make it seem. QUESTION: This could be a gateway to stardom for all of you, have you dealt with the question what if that happens and how you’re going to cope with it because things might not be the same again?

PRINCE: Well, that would be a dream come true BORTEY: We would be happy because it’s all of wish to make it in the movies someday

QUESTION: Why the name THUG, why not any other name?

BRADLEY: Because I love hustling. I’m a real hustler. Starting from when I was growing up, I’ve always kind of hustled.

QUESTION: You studied Marketing at Hamburg University and you sing and now you’re into movie making, are you planning to do that fulltime or it’s just for a while?

BRADLEY: Well, actually I’m into a lot of things. I’m a businessman. Currently I’m setting up a beauty shop with some friends and that will be opened in three months time. And of course after this, I´m already planning the next movie.

QUESTION: And what’s it going to be like, do you have one ready or you’re still thinking of writing one?

BRADLEY: I don’t wanna say too much, but let me just say the end of this movie will be open and that might mean a part 2.

QUESTION: Do you guys have anything to say to youngsters like you out there?

PRINCE: Keep the dream alive and continue struggling till you breakthrough and I want to use this opportunity to thank Bradley for this golden opportunity.

STEVE: Life in Germany is not so easy, especially for people of coloured but just persevere and you will win.

BORTEY: No pain, no gain. Keep at it and you’ll get there